All city councilors have expressed support for the movement
Jun 16, 2020 10:35 AM By: Hanna Petersen 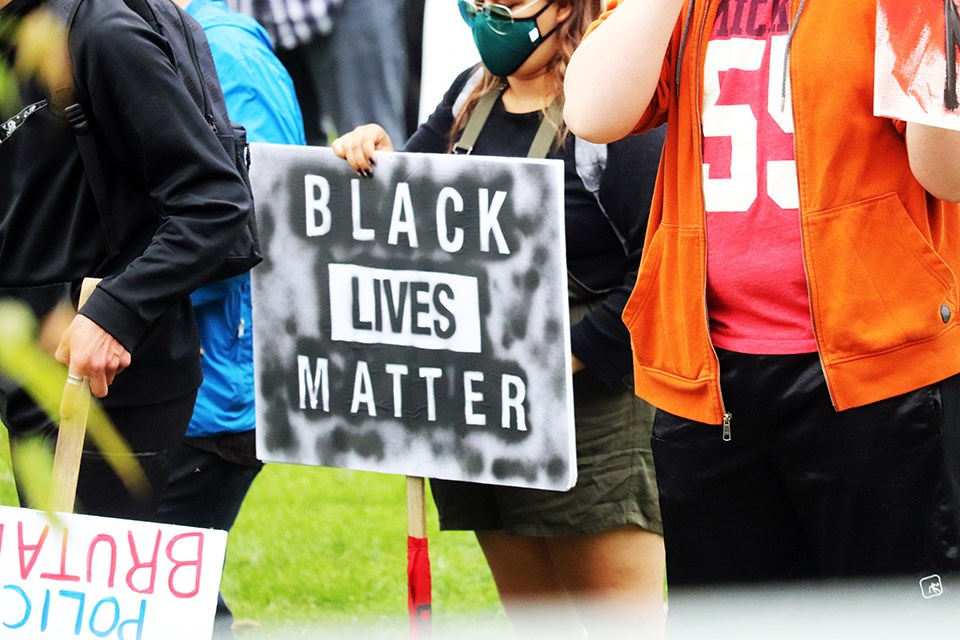 Hundreds took to the streets during the first Black Lives Matters protest in Prince George. (via Jess Fedigan, PrinceGeorgeMatters)

After thousands of Prince George residents attended two peaceful protests to support the Black Lives Matter movement and take a stand against racism, city council is now speaking up.

During last night’s meeting (June 15), Mayor Lyn Hall invited everyone around the horseshoe to take a moment and comment on the Black Lives Matter movement occurring within the city.

Two protests took place, starting downtown on June 5 then at Mr. PG the next day, the Black Lives Matter movement has seen demonstrations against systemic racism all over the world after the death of 46-year-old George Floyd, who was killed on May 25 while being held down by a police officer’s knee at his neck.

The movement has also spotlighted racism faced by Indigenous people in northern B.C. with a focus on the deaths of Dave Culver and Everett Patrick, two men who have died in police custody in recent years.

“Black Lives Matter has put a spotlight on racism around the world including Canada and that is a good thing,” said Coun. Murry Krause during the meeting who then quoted the author James Baldwin.

Krause believes this is an opportunity to have real meaningful conversations about racism in Prince George and across Canada.

Coun. Frank Everitt, who spoke next, said he was proud of the community.

“Even though it was in a different situation than most of us would have liked to be in, with COVID and social distancing, our young community came together and put a mark on the city that black lives do matter to each and every one of us,” said Everitt.

“We need to recognize those people who came out because they are the future of where we go in our community. I was very proud to look and see the reaction. It was peaceful.”

“I pledge to continue to stand for inclusive communities that recognize diversity as a fundamental value and like Coun. Krause would like to see the city open up discussions with Black Lives Matter and Indigenous groups to see how we can collaboratively move forward,” said Ramsay.

“It is time to listen, it’s time to learn, and when we do that we can move forward together.”

Coun. Terri McConnachie said it was an honour to attend the protests and noted that while it’s important elected officials express their thoughts, it’s also important to have these conversations one-on-one.

“I challenge citizens to challenge themselves and others to have those conversations no matter how uncomfortable they are,” said McConnachie.

“It has put a spotlight on the need to have understanding, wisdom and compassion spread faster than hate.”

Coun. Kyle Sampson said, at first, he thought it seemed like a no-brainer that racism was wrong.

“I thought of it very simply that racism is wrong, but the more I thought about it – it is a much bigger issue that has many different faces and discrimination takes place in many different ways. Sometimes we don’t even know it’s happening in front of us."

He then called for continued action by the city regarding the discussion of racism.

“Now is the time to condemn racism and respect the voices that are being put out there and work closely to collaboratively to put an end to this. It can’t end with statements around the table. This can’t be the end to this it has to be the beginning of our discussions.”

Coun. Brian Skakun was the only councillor to specifically refer to law enforcement.

“This really is a turning point,” said Skakun.

“I don’t think there’s ever been a moment in time with so many people and so many countries that have come together to speak out about racism and injustice. I also think that we cannot ignore that this has been a wakeup call for law enforcement to do some things differently. “

Mayor Lyn Hall concluded the discussion with his thoughts after attending the protest at Mr. PG.

“I was somewhat surprised there were very young families there, and there’s been a lot of discussion of racism over the last few weeks and when I saw the families participating -- I thought this is really an educational moment the parents are providing these kids,” said Hall, also thanking the protest organizers.

“For me it’s a need to understand a multitude of things that happen in or society when you talk about racism and it’s a time to grow as individuals. We need to keep that perspective and we will be able to continue to shine a light on racism in our country and step up with others around the world.”

A third peaceful Black Lives Matter protest is scheduled for Friday (June 19) at 2 p.m. on the steps of Prince George City Hall.

'Are you uncomfortable yet?': Prince George woman shares experiences of being black
Jun 3, 2020 4:35 PM
Comments