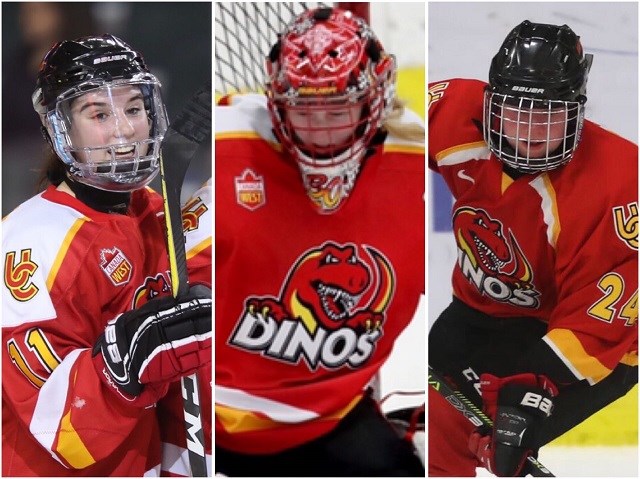 [From left to right] Taylor Beck, Kelsey Roberts and Sage Desjardins are former members of Prince George's Northern Capitals all playing for the University of Calgary Dinos in Canada West (via David Moll/Kyle Balzer)

It’s a feat the University of Calgary’s women’s hockey team hasn’t accomplished since Hayley Wickenheiser played her final season in 2013.

Now, thanks to the help of three former Prince George female midget AAA players, the Dinos earned an automatic ticket to the semi-finals with a second-place finish in the 2019-20 Canada West standings.

Goaltender Kelsey Roberts and forwards Sage Desjardins and Taylor Beck each played a role in their red and white squad’s 3-1 victory over the Lethbridge Pronghorns in the final regular-season game on Saturday (Feb. 8).

Between the pipes, Roberts turned away 13 of 14 shots.

Desjardins and Beck each got their second goals of the year by scoring the game-winning and insurance markers respectively in the third period.

Sage Desjardins gets her second goal in as many games and the Dinos lead 2-1! #GoDinos pic.twitter.com/hyFo32m9pQ

All three women, all 21 years old, were part of the Northern Capitals’ 2015 and 2016 provincial-championship seasons under current head coach Mario Desjardins.

Roberts, a 2016 graduate of Prince George Secondary School, got the chance to wear the maple leaf for the first time after making the national-development team for the Canada-USA Summer Series.

The Kitimat product finished her senior season with a 16-6-1-2 record in 25 starts for the Dinos, averaging 1.33 goals-against and 0.948 save-percentage, which ranked her second among Canada west netminders.

Calgary awaits their opponent for the best-of-three semi-final series, which takes place Feb. 21 to 23 in their home barn.