Gottdenker said he has made a point of speaking up about the Holocaust throughout his adult life
Jan 26, 2020 12:05 PM By: Canadian Press 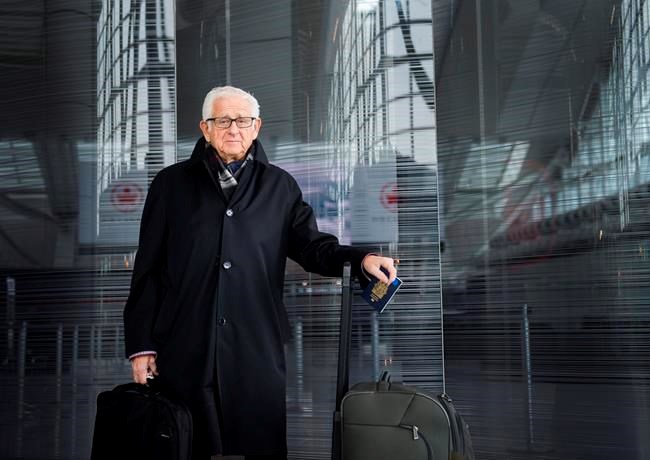 Joseph Gottdenker was not there the day his relatives were herded into a Polish town square and marked for either a stint in a forced labour camp or instant execution at the hands of German troops. He was in the home of a nearby family being raised as a Catholic — hidden in plain sight for his own protection.

None of Gottdenker's roughly 70 extended family members were immediately sent to Auschwitz-Birkenau, the notorious concentration camp hours away from their home village of Mielec. But Gottdenker, now 77, said some of them ultimately died there — just some of the roughly six million Jews slain as part of a Nazi-led genocide now simply referred to as the Holocaust.

Gottdenker, who has called Toronto home since 1958, said he visits the most infamous of the Nazi concentration camps at every opportunity to honour his family. But his next trip to Auschwitz on Monday, part of a commemorative event to celebrate the 75th anniversary of the camp's liberation, will be more about the future than the past.

"People will see the ceremony on media, and that might be their first time they've ever heard of the Holocaust," he said in a telephone interview. "If they ever come across a Holocaust denier, they can react accordingly through education. It's the only way that we're going to perpetuate the memory."

Gottdenker will be one of several Holocaust survivors on hand at Monday's formal ceremony at Auschwitz, which will also include a number of world leaders.

The ceremony, as well as one that took place in Jerusalem last week, are playing out against an increasingly tense political backdrop. A bitter dispute is raging between Poland — where Nazi German occupiers operated Auschwitz and other infamous camps — and Russia, the successor state to the Soviet Union credited with liberating Auschwitz on Jan. 27, 1945.

While Gottdenker spent his earliest years not far from the Nazi camps, he was deliberately kept oblivious of the shadow they had already cast on his life.

He said fears about the persecution of Jews in his home town had prompted his mother to come to an arrangement with a local family while she was still pregnant with him — mother and infant were to take up residence with their Catholic friends and masquerade as Christians to avoid death at Nazi hands.

When Gottdenker's mother grew fearful that she had been recognized, she went into hiding elsewhere, forced to leave her newborn son to be raised as the child of others. Gottdenker credits his survival to his mother's foresight and the selflessness of the family that he said raised him lovingly as one of their own.

Gottdenker was eventually reunited with both parents, two uncles and an aunt, but said the rest of his large extended family died over the course of the war.

His surviving family members rarely talked about their harrowing wartime ordeals, but Gottdenker said he has made a point of speaking up about the Holocaust throughout his adult life.

Recent data suggests messages like his are not always reaching their intended audiences.

A 2019 joint study between the Toronto-based Azrieli Foundation and the U.S. Conference on Jewish Material Claims Against Germany found 54 per cent of respondents did not know how many Jews had perished in the Holocaust.

The survey of 1,100 Canadians, completed both by phone and online, found 22 per cent of millennials aged 18 to 34 either had not heard of or were not sure if they were aware of the Holocaust at all.

Jody Spiegel, director of the foundation's Holocaust Survivor Memoirs Program, said many of those who made it through Nazi persecution have felt obligated to tell the world of the atrocities they witnessed.

She said many report a sense of freedom from sharing their experiences, but noted the process can be very emotional and reopen old wounds.

A rising global tide of anti-Semitism, she said, makes their message all the more urgent.

Statistics Canada documented a 47 per cent rise in police-reported hate crimes between 2016 and 2017, with incidents involving Jews surging 63 per cent and coming second only to the 151 per cent spike in attacks against Muslims.

Last year, researchers with Tel Aviv University reported that violent attacks against Jews grew significantly in 2018, with the largest reported number of Jews killed in anti-Semitic acts in decades. They recorded 400 cases, with the spike most dramatic in western Europe.

Spiegel said personal memoirs, rather than facts and figures, are the only way to combat the troubling trend.

"You need to actually bring it into consciousness, to create some historical empathy so that ... it really doesn't happen again," she said.

Spiegel said accounts from the roughly 40,000 Jews who came to Canada after the war resonate particularly strongly in Canada's increasingly multicultural society.

Gottdenker, for his part, said he'll continue to share his as long as he can.