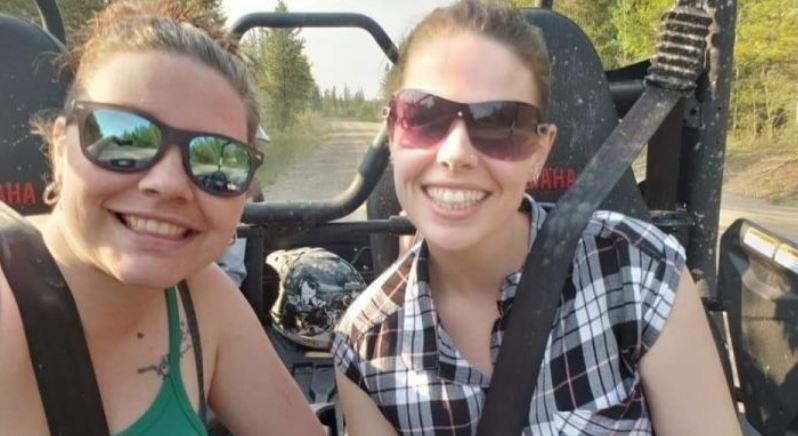 Sasha Mortensen and Jessica Raymond were taken to Prince George hospital after they were hit and dragged by a logging truck west of Vanderhoof in July 2020. (via GoFundMe)

An accident that took place along Highway 16 west of Prince George last month put two friends in hospital with one still in critical care.

A GoFundMe page has been created for Sasha Mortensen and Jessica Raymond with a $20,000 goal, claiming they were struck by a pickup truck while meeting up to exchange their kids for a sleepover.

According to the page, the two mothers met each other on July 29 near the Plateau Sawmill in Vanderhoof as it was halfway between their respective homes, pulled off to the side of Keith Road where Jessica's two children hopped in Sasha's vehicle with her two children, but that's when tragedy struck.

A logging truck allegedly came down the road, which caused a large amount of dust to fly, making visibility limited. A pickup truck was also behind the logging truck, according to a GoFundMe page's description.

"The driver of the pickup did not see Sasha and Jessica embraced in a hug beside their vehicles and ran over top of Sasha pulling her under his vehicle and trapping Jessica between her own pickup and the travelling pickup, rolling her down the sides of the vehicles and tossing her to the ground," the statement reads.

"Sasha was thrown from under the travelling pickup under her own Jeep. Jessica came out of her shocked state to the sounds of their screaming kids and was able to pull Sasha from under the jeep and revive her on scene."

One of Jessica's daughters called 911 and her dad, Chris, while her mom tried to cover Sasha's massive wounds with gauze that the pickup truck driver had with him.

Her legs were covered in scratches and one foot was scraped down exposing the bones.

Emergency services arrived on the scene where Sasha would be airlifted to the University Hospital of Northern B.C. (UHNBC) in Prince George.

She needed emergency surgery to remove her spleen and a liver bleed. She was also placed in a medically induced coma for three days due to swelling in her brain.

When she woke up, Sasha was able to talk and wiggle her toes and fingers, but had no recollection of the horrific accident.

Jessica was taken by ambulance to UHNBC for treatment. She has numerous fractures in her right shoulder and upper chest. She also suffered internal bruising including bruised lungs.

She was released from hospital the next morning, July 30, but returned on Monday (Aug. 3) after she suffered complications from the internal bleeding.

The page says Jessica was released later that day.

Sasha remains in the ICU at UHNBC with her husband, while her two kids are staying with their grandparents.

If you wish to donate, you can do so online.