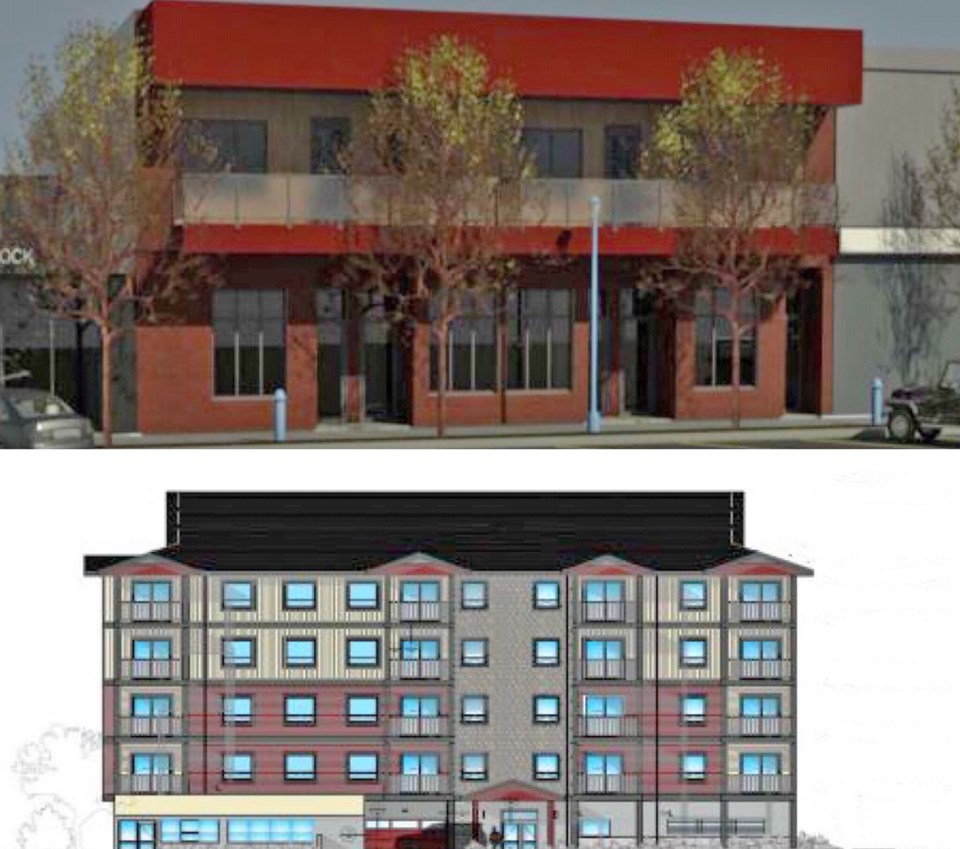 Renderings of the Third Avenue development above and the 32 unit apartment on 15th Avenue below. (via City of Prince George)

Two Prince George developments are standing out from the crowd.

A new building earmarked for a vacant lot on Third Avenue and a new apartment building going in on 15 Avenue, are turning heads even before construction begins.

The two developments were given project recognition certificates by the city’s Advisory Committee on Development and Design.

The committee is made up of architects, landscapers, planners, and other community members to classify and rate projects based on aesthetics, accessibility, climate-sensitive design, crime prevention through design and the overall design, of course.

“The intent is to identify one or two projects deserving of recognition by council,” said committee chair Bruce Johnston, at city council’s March 11 meeting.  “This year we identified two projects that we believe make a significant contribution to design standards in our community.”

Before and after of the development on Third Avenue. (via City of Prince George)
The first project Johnston identified is 1250 Third Ave. which was recognized for downtown form and character.

“This development facilitates the construction of a two-story mixed-use building with commercial space on the main floor and four apartments on the second floor,” said Johnston.

He said the building was selected because it features private outdoor living spaces in the form of rooftop patios for each of the apartments, and it facilities crime prevention through the use of environmental design principals.

He added that the development is also significant because it will redevelop a vacant lot in the downtown.

The new building will be located in the space between the Generator and H&R Block on Third Avenue.

The second development Johnston identified was a 32-unit apartment building at 3450 15th Ave. which was recognized for form and character.

This building also incorporates commercial space on the main floor, which is intended for a salon.

“The committee selected this project based on the mixed use of an apartment building with thoughtful use of space within a constrained site,” said Johnston.

He added the building was selected because of adaptable and accessible apartment units, incorporation of community amenities such as raised garden beds and improved landscaping which enhances the livability of the site for tenants, and consideration of the development within the context of the existing neighbourhood.

The committee conducts an annual review of all issued development permits and design review applications. One of the past recipients is CrossRoads Brewing which received a recognition award back in 2016 for the development of the brewery on George Street.

Neighbours angry over new Prince George gas station and car wash
Mar 13, 2019 12:35 PM
Comments
We welcome your feedback and encourage you to share your thoughts on this story. We ask that you be respectful of others and their points of view, refrain from personal attacks and stay on topic. To learn about our commenting policies and how we moderate, please read our Community Guidelines.