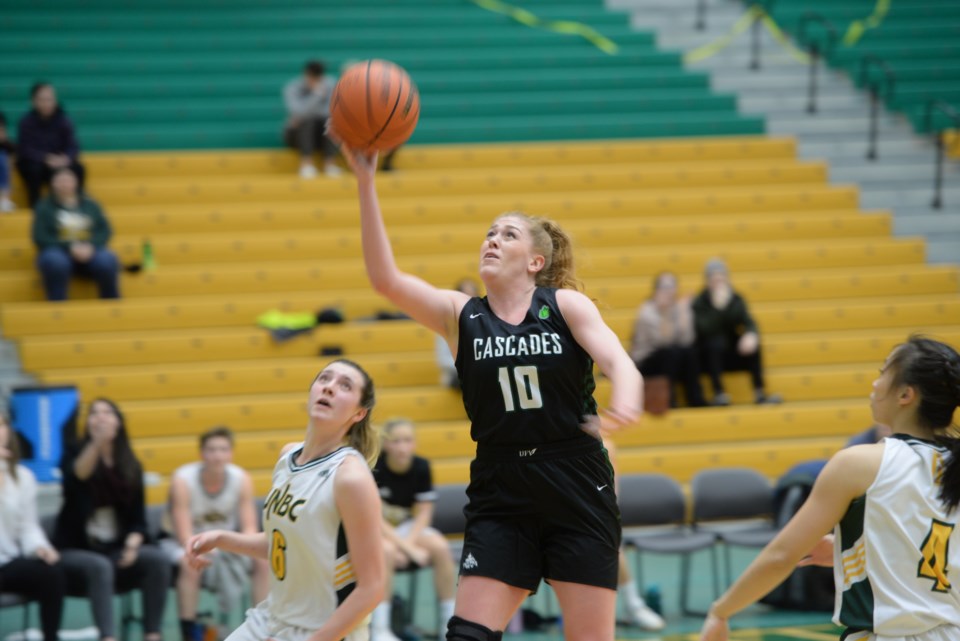 Taylor Claggett was the story of Friday night against the UNBC Timberwolves as she made her way into the Canada West history books. (via UNBC Athletics)

History was made Friday night (Jan. 10) at the Northern Sport Centre in Prince George, but it wasn't for UNBC.

The UNBC Timberwolves women's team was looking for their first win in 2020 after being swept last weekend (Jan. 3 and 4) in Calgary against a powerhouse in the Dinos.

Last night, the University of the Fraser Valley (UFV) was in town for the first of a two-game weekend series.

Cascades' Taylor Claggett nailed two free throws in the second quarter, surpassing the previous Canada West record that was held by Saskatchewan's Sarah Cooks with 455 while leading her team to a 79-67 win over UNBC.

The first stanza went to UFV, who came out firing from the start with Claggett being successful down low to put UFV up 23-10 after the opening 10 minutes.

The second quarter was where things ramped up.

UNBC's Madison Landry drove to the hoop and appeared to draw contact, but officials made no call which upset Timberwolves Head Coach Sergey Schepotkin who would be ejected from the game after getting two technical fouls.

She would finish the night 11/12 from the charity stripe which now puts her at 463 for her career.

“Honestly, I wasn’t even thinking of it. It’s a cherry on top of the win, but it wasn’t something I set out to do,” said Claggett postgame. “It’s a byproduct of the way I play, so I keep attacking the hoop. It’s a nice reward to have.”

She went 11/12 from the line, ending the night with 463 for her career, surpassing the previous mark of 455 established by @HuskieAthletics’ Sarah Crooks! 👏👏👏 https://t.co/oiqpmi1nRp pic.twitter.com/EIOpbowpt1

It would spark the Timberwolves, who went on a 11-2 run and would end the first half of play knotted at 42.

“They stepped up for each other, and we started to show more patience on offense,” said Dave Holmes, who slid into the UNBC head coaching role in Shchepotkin’s absence. “We were sharing the ball and looking for better opportunities. But, more players need to go for it and take good risks.”

POSTGAME: Called into action to serve as head coach, @UNBCWomensBball's @Dholmespg talks about the TWolves' effort tonight in a tough 79-67 loss to @UFVCascades. Rematch tomorrow at 5 PM! pic.twitter.com/ldC3h2UzFu

Claggett once again would come up clutch in the third with a buzzer-beating three to put the visitors up 62-68 heading into the final frame.

The Timberwolves struggled to find their footing in the fourth with UFV's Deanna Tuchscherer hitting clutch shots to extend the Cascades lead to 10 which lifted UFV to a 79-67 win.

Claggett filled the scoresheet with 30 points, 15 rebounds and four assists.

“We need defense. If we played better defense in that second quarter, the score might have been different,” Claggett added. “Tomorrow, we need to dig in on defense and hopefully get the same result.”

The Charles Jago Northern Sport Centre followed by the men at 7 p.m.