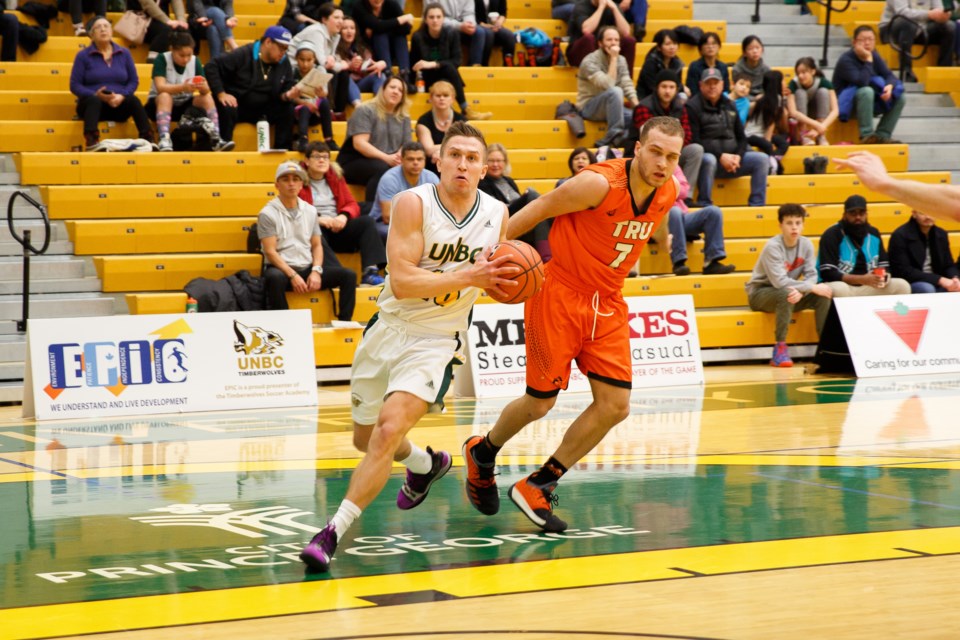 The UNBC Timberwolves basketball teams started 2019 off on the right foot with wins against the visiting Thompson Rivers University WolfPack on Friday night (Jan. 4).

The women came out on top in the first of the back-to-back series with a 78-55 win at the Charles Jago Northern Sport Centre in Prince George, while also keeping their undefeated record at home intact.

UNBC centre Alina Shakirova led the way for the Timberwolves dropping 18 points, going 6-of-10 from the floor with seven rebounds and four assists, which earned her player of the game honours.

“My teammates were finding me for good shots,” Shakirova says in the release. “We were playing good team defence, especially in the third quarter. It gave us confidence, and my team was believing in me.”

Forward Maria Mongomo added 16 points along with eight rebounds, one assist and five steals while forward Vasiliki Louka added 11 points, 16 rebounds and three blocks. Madison Landry was also involved in the high scoring offence of UNBC with 13 points as well as six assists.

Kanesha Reeves led the way for TRU with 11 points, three rebounds, two assists and one steal.

“Our shots just weren’t falling tonight,” TRU's Reeves says in a press release. "Our defence was pretty good, but offensively we need to make those shots and find a way to get to the free-throw line a bit more.”

The Timberwolves went 45.6 per cent from the floor while the WolfPack shot a dismal 28.4 per cent.

With the win, UNBC now improves to 7-4 and also snap their four-game losing skid while TRU falls to 4-7.

“Every game is a new game. We can’t think about this one,” Shakirova says. “We start zero-zero, and we will need to come with even more effort. We know they are a really strong team, and they need points, so we will need to be good.”

The men's teams played a closer game, but the Timberwolves once again emerged victorious with a 90-81 win.

UNBC was behind for a larger chunk of the game but took over in the fourth quarter, dropping 31 to secure the win on home court.

Guards Vova Pluzhnikov and Jovan Leamy led the way for the Timberwolves scoring 25 and 24 points respectively.

With just 4:49 remaining in the fourth quarter, Pluzhnikov and Anthony Hokanson nailed three-pointers to give the Timberwolves a 76-72 lead. Jovan Leamy also hit a fadeaway three with a hand in his face with 42 seconds remaining which iced the game for UNBC.

“I feel like I can make any shot. Why take it if you don’t think you can make it,” says Leamy in the release. “Everyone’s confidence needs to be high, that is the only way we will be successful.”

“It’s hard for them to guard us inside, but they have really good guards,” TRU’s Rhodes says in a release. “We have to defend the ball screen better. When you have good guards, it’s tough.”

Both teams have identical team records as the woman after the games on Friday night with UNBC sitting at 7-4 and TRU now falling to 4-7.

.@VovaPluzhnikov had 25 points, 6 rebounds & 5 assists, and JV Leamy had 24 points, 7 rebounds, 6 assists, and 5 steals, earning them @MrMikesPG Players of the Game in @UNBCBasketball's 90-81 win over @GoTRUWolfPack! pic.twitter.com/3WUNjPLaU6

The two teams go at it again tonight (Jan. 5) at the Charles Jago Northern Sport Centre with the women tipping off at 5 p.m. and the men following after at 7 p.m.