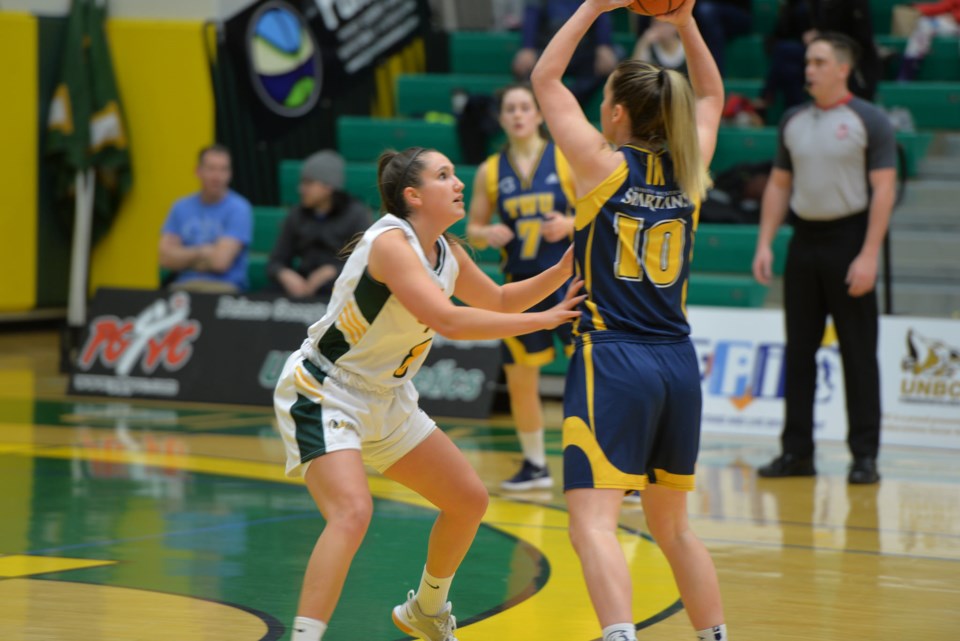 One game was not like the other Friday night (Nov. 16) at the Northern Sport Centre with the Trinity Western Spartans in town for a weekend series.

The UNBC women were looking to push their unbeaten record to 5-0 while Trinity Western was looking to also remain undefeated. It wouldn't be their night in the end, but it sure was a back-and-forth thriller.

In the third quarter, it seemed the Spartans had a hold of the Timberwolves leading by 11 at one point. But UNBC clawed their way back thanks largely in part to guard Madison Landry.

Landry would pull the Timberwolves even in the fourth quarter at 73 with just over three minutes to go. But the drama came with under a minute to go.

The Spartans Sarah Buckingham would hit a three with 34 seconds left to cut UNBC's lead to just one. Then, Landry would cough up the ball with 10 seconds left giving Trinity Western a chance to win the game. Jessie Brown would have a great look from three but couldn't nail the shot and Vasiliki Louka would grab the defensive board for the Timberwolves to seal the win.

Landry went off on the evening with a perfect 11-11 from the field for 25 points while adding four assists and three rebounds in 36 minutes of action.

11-for-11 from the field, 25 points, 4 assists, 3 rebounds, and @landry_madi earns the @MrMikesPG Player of the Game in an incredible 78-77 @UNBCWomensBball victory over the @TWUSpartans! Congrats, Madi, and thank you Mr Mikes!! pic.twitter.com/9uDuMvjdmj

“We really wanted to win, and we brought it together in the second half as a cohesive unit and got the job done," said Landry, the Timberwolves player of the game, after the win.

UNBC shot 54.8 per cent from the field hitting 34 of 62 shots while hitting 35.3 per cent from downtown. They also led in the rebound category with 35.

The ladies remain undefeated at 5-0.

TIMBERWOLVES WIN! 78-77 @UNBCWomensBball edges @TWUSpartans to stay unbeaten! What a game, and we get to see it again tomorrow!

The men's game was not nearly as nail-biting.

Trinity Western came into the night looking for their first win of the year, which a record of 0-6 while the Timberwolves were looking to improve to 4-1.

UNBC came out flying in the first, outscoring TWU 31-13 thanks to a 13-1 run which saw Jovan Leamy and Austin Chandler combine for three dunks and 18 points. In the second they would again take the quarter 16-10 and would dominate the third outscoring the Spartans 24-15. They would then take the fourth 30-20.

“Whenever you start a game like that, everyone gets going,” UNBC rookie guard Chris Ross said postgame. “That is when the crowd is most alive, and you can ride that wave.”

Ross came off the bench and hit 4-7 from behind the arc for 12 points.

History was also made on the men's side with Vaggelis Loukas adding 12 points and 11 rebounds which made him the Timberwolves all-time leader in rebounds, passing Dennis Stark.

“It’s about being professional. The guys have to prepare tonight as though we lost tonight,” UNBC head coach Todd Jordan said postgame. “You don’t need to be a professional to bring a professional mentality to the game. We need to try to execute the same things, and understand why we were successful.”