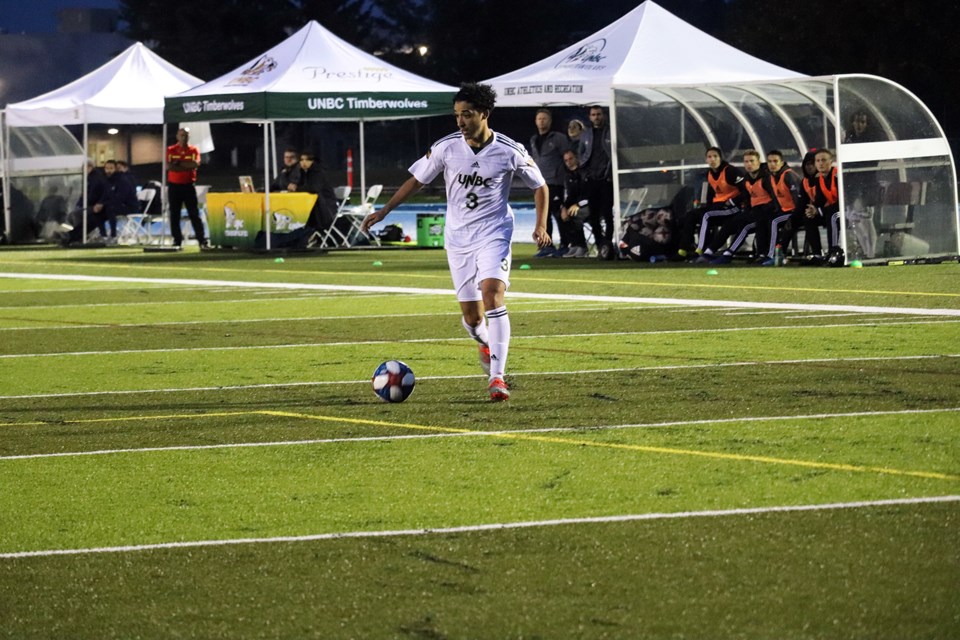 The UNBC Timberwolves won a thriller against the MRU Cougars. (via Jess Fedigan)

It's going to be a weekend for the UNBC Timberwolves soccer teams to solidify themselves in the 2019-20 Canada West season.

The men are on the road for games at Alberta on Saturday (Sept. 21) followed by a matchup against MacEwan on Sunday (Sept. 22) and are coming off a massive win against Mount Royal (MRU).

The women meanwhile, are at home against Lethbridge tomorrow (Sept. 20) and then host the MRU Cougars Sunday afternoon.

“Our mindset going into the Alberta game should be the same as it has been all year; go out and try to put a great performance on the field," UNBC's Jonah Smith says in a statement. "We understand that the result is ultimately out of our control. The results against Victoria and MRU show the strength of the team's collective mindset, and our ability to thrive in adversity.”

“MacEwan is a good team and we are expecting a strong performance from them," Smith adds. "They are always well organized and have some really good athletes. We have to prepare well and ensure we take care of the details.”

“We have done our research on Lethbridge, and we are looking to earn those three points at Masich Place," UNBC's Julia Babicz says. "Our team is a resilient group with enough diversity on the pitch to take the win this weekend. The first goal of this game will be to assert ourselves.  We want them playing catch-up, especially on the road.”

“Any team is capable of coming back in the Canada West," Babicz adds. "Going into any game, your mentality has to be levelled.  We expect each of our opponents to have the best game of their life. If we prepare that way, personally and as a squad, we will be ready. The last time we played Mount Royal was two years ago. A lot can change in two years.”

The women kick off against Lethbridge at 6 p.m. at Masich Place and will host MRU Sunday at Noon.

The men kick off against Alberta Saturday at 2:15 p.m. while facing MacEwan the next day at 2:30 p.m.

UNBC Timberwolves women's soccer looks to build on historic 2018-19 season
Sep 3, 2019 4:15 PM
Comments
We welcome your feedback and encourage you to share your thoughts. We ask that you be respectful of others and their points of view, refrain from personal attacks and stay on topic. To learn about our commenting policies and how we moderate, please read our Community Guidelines.