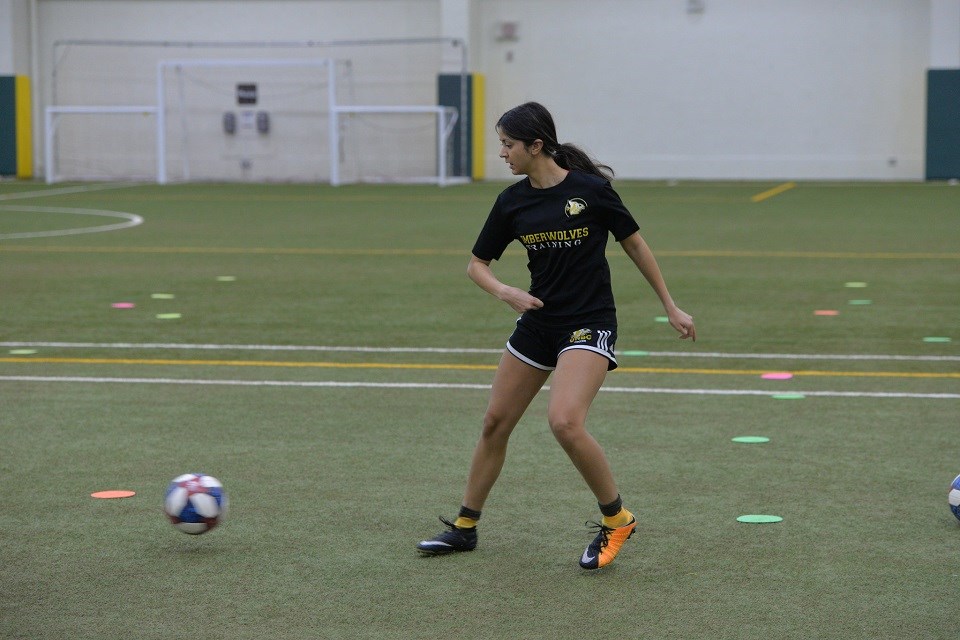 Surrey's Anna Kaied is transferring to UNBC in Prince George from Langara in pursuing a higher level of university soccer.UNBC Athletics

Anna Kaied thought her time in the beautiful game was over when deciding to pursue post-secondary education in Prince George.

Then along came the opportunity to train with the UNBC Timberwolves during the COVID-19 pandemic and her passion immediately resurfaced.

The Surrey product has officially signed transfer and commitment papers to compete for the women’s soccer team, starting in 2021-22, after spending two seasons with Langara College.

“Considering I thought I was going to retire after last year, it’s nice to just train and get my feet back under me,” Kaied explained in a team release this morning (Feb. 17).

“There is not a lot of pressure in terms of game aspect. Just training and getting myself back to where I was.”

Langara competes in the PACWEST Conference of the Canadian Collegiate Athletic Association (CCAA), which is the country’s second-highest level of university sport.

With Kaied’s promotion, she hopes to offer experience that can provide quality skills and knowledge on and off the field.

“There are no nerves. I have been the new girl, and been the rookie. I think this is really cool. It is quite the honour. I would have never seen myself in Prince George two years ago, but here I am, and I am really excited for it.”

Kaied adds she was influenced to get back into the game by Head Coach Neil Sedgwick, who noticed her footwork and technical skills that could be put to work in midfield or on the wing when competitive games return.

“We feel incredibly fortunate that Anna is now studying in Prince George, and showed interest in our program. She comes from a strong youth program in TSS, plus her time at Langara, so she brings a great deal of experience to our team. As a dynamic attacking player, it will be exciting to watch her develop and find her way within the group’s playing model.”

Kaied, the fifth off-season signing for the T-Wolves women’s soccer squad, plans on pursuing a career in pediatrics while studying in UNBC’s nursing program.

She’ll join her teammates in August for training camp as they, and their fellow Canada west opponents, wait to hear if a season will go forward amid the pandemic.

The 2020-21 season was cancelled out of respect for health and safety of players, coaches, staff, volunteers and fans.