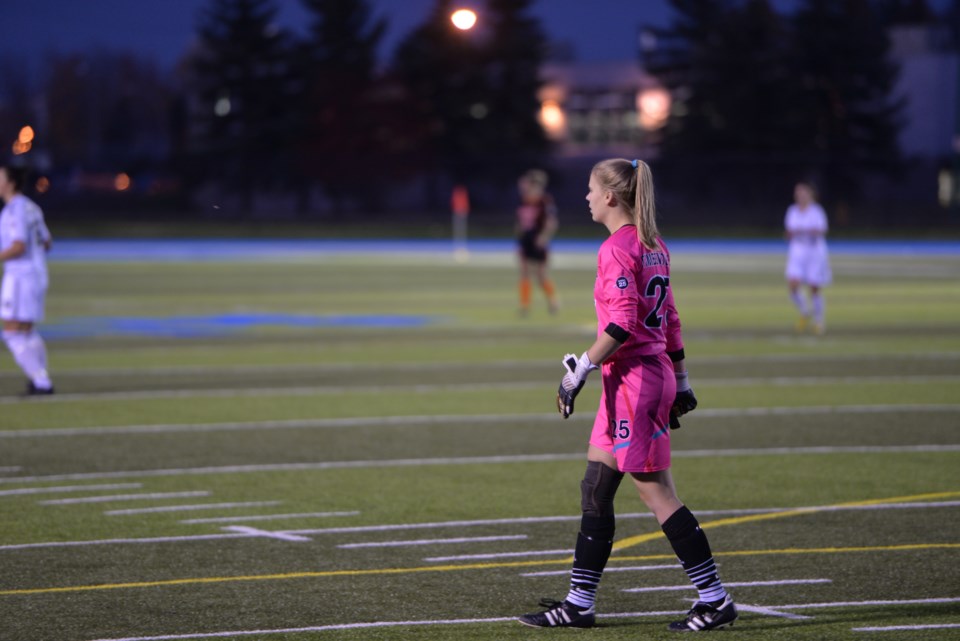 The University of Northern British Columbia (UNBC) women's soccer team put on a stellar effort on Friday night (Oct. 19) to keep hopes of advancing to the postseason alive with a 2-0 win over the Thompson Rivers University (TRU) WolfPack at home.

The Timberwolves needed a win to have any chance of moving onto the Canada West playoffs: anything less meant being eliminated from contention.

Goalkeeper and Squamish native Brooke Molby was originally supposed to back up Madi Doyle, but then was told after warmups that she would be starting in net.

“I was nervous when Neil said I had to go in, but the team had my back,” Molby said in a press release. “I really wanted to win today, and I am glad we did. Hopefully, we win on Sunday and can make playoffs.”

It didn't take long for UNBC to strike when Julia Babicz took a pass from Sofia Jones. Jones sent a ball into the box where Ashley Volk would head in the first goal of the match just inside the far post. Volk picked the perfect time to score, as it was her first ever goal of her Canada West career.

Just near the end of the first half, Timberwolves' Hannah Emmond would have her header just roll wide, but UNBC went into the half with the 1-0 lead.

But only minutes into the second half, Emmond, who made history on Friday night becoming the UNBC women's soccer all-time games played leader, would redeem herself.

Mikaela Cadorette would slip a great pass to Paige Payne, who would lay if off to Emmond, who would beat TRU goalkeeper Danielle Robertson to make it 2-0 for UNBC.

The WolfPack would come back with looks from Natalie Verdiel, Camryn Curtis, and Shae Fuoco, but Molby was equal to the task.

In the 71st minute, Payne would be awarded a penalty for the Timberwolves, but Robertson would come up huge for TRU making a diving save to her left.

Molby would once again come up big for her club, stopping a Marisa Medonca shot and then robbing a corner from Marlie Rittinger.

She ended with 12 saves for the Timberwolves, but the WolfPack's keeper also put on a great performance with 14 saves on 16 shots.

WSOC: Our @UNBCWSoccer hold off the @GoTRUWolfPack 2-0 as Brooke Molby gets a shut out with 12 incredible saves. Tune back in this Sunday, October 21st as our UNBC T-wolves face off against @UBCOHeat #gotwolves #runasone pic.twitter.com/7T4iWou5pf

On Sunday (Oct. 21), the Timberwolves need a massive win against the University of British Columbia Okanagan Heat. UNBC also needs a TRU loss to MacEwan to qualify for the postseason.

If the WolfPack win, and the UBCO-UNBC match ends in a draw, Thomspon Rivers will qualify.

“We are going to go and take care of ourselves mentally,” Robertson said in the release. “We have had a tough season, and we have been unlucky this season. So we are going to come out fresh, knowing we can do this.”

Details on new federal daycare spending coming in budget, minister says
Jan 29, 2020 7:05 AM
Comments
We welcome your feedback and encourage you to share your thoughts on this story. We ask that you be respectful of others and their points of view, refrain from personal attacks and stay on topic. To learn about our commenting policies and how we moderate, please read our Community Guidelines.