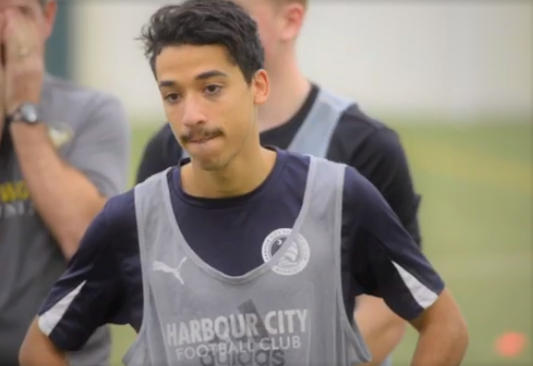 It's a phrase that doesn't seem to be getting old this offseason: the University of Northern B.C. (UNBC) continue to bolster their men's soccer roster.

The Timberwolves have announced the arrival of Hussein Behery from the Vancouver Island University (VIU) Mariners.

He played three seasons at VIU; during his 2017 season, the squad claimed the CCAA Championship, but the chance to play U-SPORTS soccer with the Timberwolves was something he couldn't pass up.

The experienced attacking midfielder/winger paid two visits to UNBC before deciding to transfer.

The 23-year-old Cairo, Egypt product toured facilities and especially enjoyed the inside gym and training opportunity who also points to the team environment as a deciding factor.

“It is unreal. I like the indoor facilities. I like to train indoors," he says. "The gym, the changeroom, all that stuff is big for me. I like it. The facilities are very nice. The program that Steve has is all about helping his players improve. It is a huge thing. Everyone is close, everyone is positive. They are all tight, and you can tell from the vibes.”

A total of 10 players graduated from UNBC this past year and head coach Steve Simonson knew right away Behery was someone he needed on the squad.

“Hussein is a Tremendous dribbler and has a terrific attacking ability," Simonson says in the release. "He fits our attacking needs really well, and has a chance to really contribute here. He gelled seamlessly with our team during his visit to UNBC, and his experience in the PacWest will really help him step in and make a significant impact at U SPORTS level.”

Behery finished second in scoring at VIU, tallying three goals during the 2018-19 season.

“Teams in the PacWest, there are some very good players," he says. "We had a very good team, winning Nationals. We hosted the Nationals in Nanaimo, and there was probably 1000 people there. It was a great experience. One of the best experiences of my life, by far.”

Behery is working towards a Bachelor Degree in Tourism Management while majoring in Recreation Sport Management.

UNBC Timberwolves women's soccer adds physical midfielder
Dec 21, 2018 10:35 AM
Comments
We welcome your feedback and encourage you to share your thoughts. We ask that you be respectful of others and their points of view, refrain from personal attacks and stay on topic. To learn about our commenting policies and how we moderate, please read our Community Guidelines.