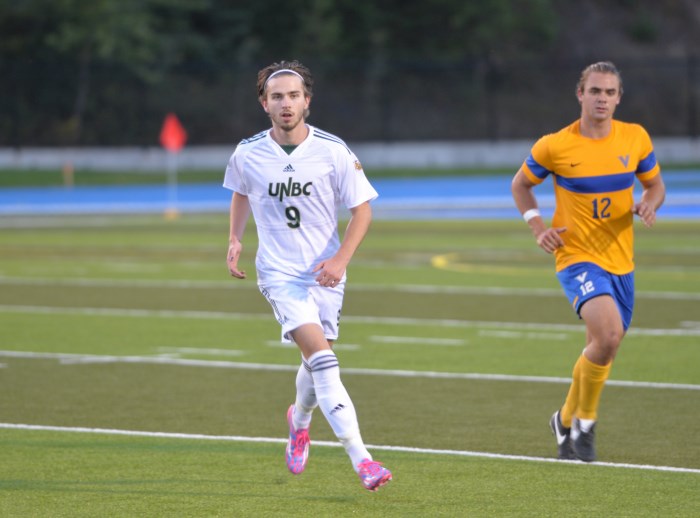 The struggles continue for the UNBC men's soccer squad.

The Timberwolves dropped a 1-0 decision in Victoria last night (Sept. 6) in an evening clash against the UVic Vikes.

Victoria came into the game with a 2-2-0 record while UNBC came in sporting a 1-2-1 record.

The Timberwolves lone win of the year was against the UBCO Heat with a 2-1 win on Aug. 24.

Hear from @rgoodey01 as the @UNBCMSoccer prepare for a pair of big games in Victoria against the @uvicvikes. Follow the link for stats, leaders, milestones, and players to watch! #gotwolves https://t.co/s2mESffK1x pic.twitter.com/eJvtvgksDG

In front of a crowd of 3,000 at Centennial Stadium on Friday night, the Timberwolves hung in tight, leading the first half with great goal opportunities for Owen Stewart and Michael Henman, but both couldn't convert which led to both teams heading to the locker room scoreless.

The scoreline would hold for the first 10 minutes of the second half but then UVic would draw first blood.

Niko Cristante would net his first of the season in the 54th minute, putting the Timberwolves behind which would prove costly in the end with UNBC unable to convert on any second-half chances.

UNBC had a total of seven shots on goal, with three being on target while the Vikes totalled 11 with eight on goal.

Timberwolves Keeper Rob Goodey made a total of seven saves for UNBC, giving them chances to get back into the match.

Tough one. @UNBCMSoccer falls 1-0 to @uvicvikes. TWolves with chances, but couldn’t convert. Hear from midfielder Joel Watson on the effort. pic.twitter.com/oOgk3zbbVg

UNBC now holds a season record of 1-3-1 and will once again play the Vikes tonight at 7 p.m. in Victoria.