Even the rain and cold temperatures couldn't dampen the mood of a massive 3-2 win for the UNBC men's soccer team.

The Timberwolves came into tonight (Sept. 13) sporting a 2-3-1 record and essentially participated in a David against Goliath battle with the MRU Cougars.

The Cougars came into Masich Place Stadium with an undefeated record of 5-0-0 and UNBC knew they would be in tough for a full 90, but it was nothing short of amazing.

UNBC struck first in the 30th minute thanks to an Owen Stewart goal, which put the crowd into a frenzy as well as the Timberwolves bench.

Sadly, it wouldn't last very long as just minutes later, MRU's Dawid Dudek would knot the game at one in the 36th minute of the first half.

And then, the second half was something incredible.

It didn't start the way the Timberwolves wanted, with Dane Domic adding a second for the Cougars just one minute into the second half to make it 2-1 for the visitors.

But UNBC never said die in an extremely physical match. 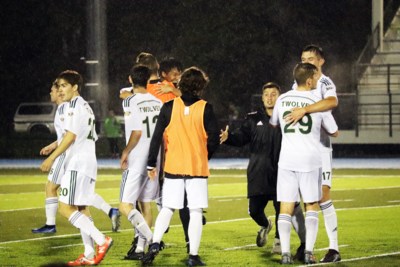 The UNBC Timberwolves won a thriller against the MRU Cougars on Friday night. (via Jess Fedigan)

Stu Rowlands would come up huge for the Timberwolves in the 56th minute, finishing a great opportunity off a corner in the box to even the game at two.

The hundreds in attendance were loud but they would get even louder.

In a fitting way, Prince George product Anthony Preston would play hero, netting a laser in the 69th minute to give UNBC a 3-2 lead, much to the delight of the fans in the stands but to the dismay of MRU.

Four minutes of added time was put on the clock after the full 90 and the Cougars came close numerous times with constant pressure in the UNBC box.

Timberwolves Keeper Rob Goodey would come up with a jaw-dropping diving save in the last few minutes of the game to clinch the win for UNBC.

What a night at Masich Place Stadium. @UNBCATHLETICS @UNBCMSoccer handed the previously undefeated @mrumsoc their first loss of the season, in a 3-2 thriller in front of hundreds of fans. MRU was 5-0-0 before the match #runasone #unbc #canwest #mru #princegeorge pic.twitter.com/mn8DOKwTKw

Nerves were high all night but when the final whistle blew, it was all celebration.

“It’s clicking right now. I am slowing my game down a little bit and focusing on my game,” UNBC's Owen Stewart says in the same release. “It’s just trust. I know the guys are going to be running and looking to score. It is starting to click and it feels amazing."

Next up for the men is a date with Alberta on Sept. 21.

POSTGAME: The game-winning goal came off the foot of @UNBCMSoccer's Anthony Preston in the 69th minute! Hear from the @UNBC sophomore about his team's effort against the @MRUCougars! pic.twitter.com/yyjh2eeIZS

Jones leads UNBC women's soccer to second consecutive win to start season
Sep 7, 2019 3:46 PM
Comments
We welcome your feedback and encourage you to share your thoughts on this story. We ask that you be respectful of others and their points of view, refrain from personal attacks and stay on topic. To learn about our commenting policies and how we moderate, please read our Community Guidelines.