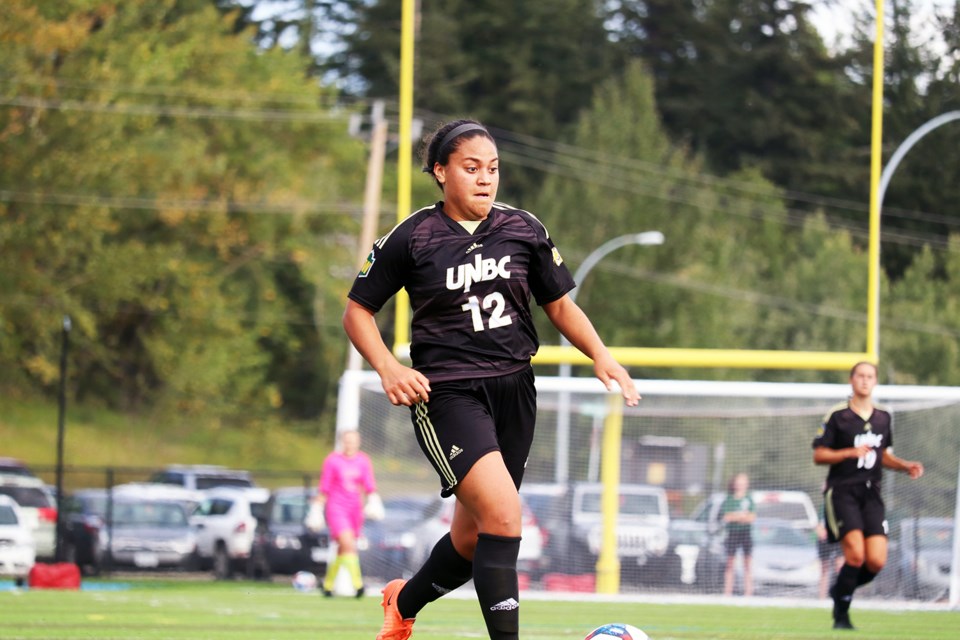 Kiana Swift and the UNBC Timberwolves improved to 3-1-1 for the 2019-20 season with a win against the Lethbridge Pronghorns. (via Jess Fedigan)

It must be something in the grass.

Coming into the game, UNBC was perfect at home with a 2-0-0 record but were coming off of a loss against the Saskatchewan Huskies and a tie with the Regina Cougars last weekend on the road.

Just under a dozen minutes into the match last evening, the Timberwolves lost defender Lydia Lavigne to an ankle injury. She was replaced by Kensie Chilcott in the 12th minute.

But the freshman suffered her own injury just 16 minutes later which meant trouble for the backline.

Timberwolves head coach Neil Sedfwick had to make a bold move: moving all-star forward Paige Payne to fill the back.

When two defenders were lost midgame to injury, @CanadaWest All-Star fwd @PaigePayne74 was tabbed to move to the backline against the @UofLPronghorns. The Pride of Kitimat did just that, helping @UNBCWSoccer top the Horns 1-0, and earning #PP7 the @MrMikesPG Player of the Game! pic.twitter.com/FDNVEVXCmv

“The adaptability of our team is phenomenal. Paige is a striker and she is playing center back,” said UNBC keeper Brooke Molby after the match in a release. “All the girls are able to play in so many positions, it is awesome.”

In the 36th, speedster Julia Babicz had their best chance after she put defenders behind her, putting her shot past Pronghorns keeper Hanna Quinn, but would be stopped by the post.

HIGHLIGHTS! The sights and sounds of a 1-0 @UNBCWSoccer @CanadaWest win over the @UofLPronghorns, with postgame chatter from @UNBC’s Brooke Molby & @hannahemmond3, and Lethbridge’s Jesse Dueck! https://t.co/PNwU4kXMDy

Lethbridge had a few chances before the end of 45, but the score remained deadlocked at zeros heading into the locker room.

The soccer gods gave the Timberwolves what they needed in the 69th minute as Sofia Jones found herself all alone on a break but would be stopped by Quinn.

Jones gained back possession and slid the ball to hometown native Hannah Emmond, who made no mistake to put UNBC up 1-0.

“Sof had an amazing run and dribble, and I just thought I wouldn’t be quick enough so I just sat back,” said Emmond with a laugh, postgame in a release. “She played a perfect pass, and I got a free shot off. I can’t credit our team enough. Everyone is part of the play. Their movements are creating opportunities.”

The score held up which game the Timberwolves their third win of the year, improving their record to 3-1-1 while also remaining undefeated at home with two other wins coming against the Thompson Rivers University WolfPack and the University of British Columbia Okanagan Heat.

In the win, Timberwolves keeper Brooke Molby earned her second clean sheet of the season.

The Timberwolves will host the winless Mount Royal Cougars (0-5-0) this Sunday (Sept. 22) with kickoff scheduled for noon at Masich Place Stadium.

POSTGAME: With her second goal in three games, PG product @hannahemmond3 talks after her @UNBCWSoccer's 1-0 win over the @UofLPronghorns! pic.twitter.com/4Otkdjh9sT