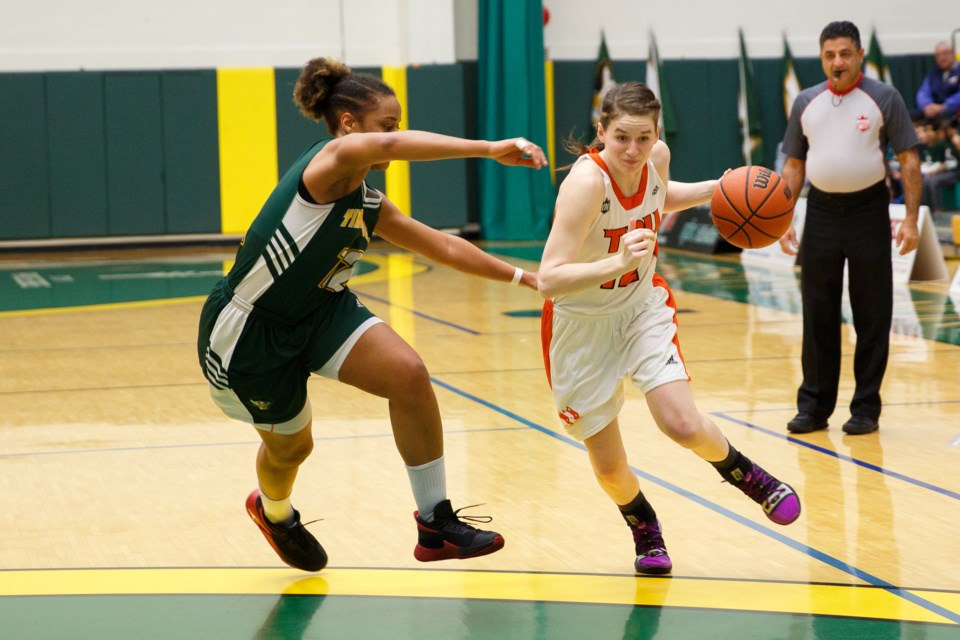 It's been home sweet home at Charles Jago Northern Sport Centre for the women's UNBC basketball team this season while the men haven't had the same experience.

UNBC dominated from the start and didn't let up, eventually ending up with a 79-49 blowout over the WolfPack.

Timberwolves forward Vasiliki Louka led the way for UNBC with a double-double, dropping 19 points, 10 rebounds, one steal and one block on the evening.

Alina Shakirova had another dominant game for UNBC as well, also adding 19 points, four rebounds, three steals and one block.

“Alina was huge for us in both the games this weekend, and it’s really great to see her step up with all those points,” UNBC guard Madison Landry says on Shakirova’s successful night in a press release. “Last year she was our defensive stopper, but she has grown so much offensively for us.”

The WolfPack had only one player in double figures with Michelle Bos scoring 14 points along with two assists and one rebound.

“It was good to get that rest during the break, but we still came out this weekend playing the way we wanted to, hitting our fast break passes, and getting into our sets,” Landry adds in the release.

TIMBERWOLF TOP TEN! The @UNBCWomensBball team improved to 8-4 with a sweep of the @GoTRUWolfPack this weekend, and here is your chance to check out ten of the best @UNBC plays! pic.twitter.com/yQ4Y7BeGvU

The men, on the other hand, didn't have as successful of a weekend as they would have liked, splitting the back-to-back with the WolfPack.

UNBC guards Vovla Pluzhnikov and Jovan Leamy once again led the way for the Timberwolves with Pluzhnikov dropping 22 points, four rebounds, four assists and one steal in a team-high 43 minutes of floor time.

Leamy earned a double-double with 20 points, 13 rebounds, six assists and three steals in 41 minutes of action.

Anton Vilous led the way for TRU with 26 points, six rebounds, two assists and one steal in 31 minutes on the floor.

After going to trip overtime in the preseason, the battle of the wolves once again went to OT, with UNBC coming from behind in the fourth quarter to force extra time but would see the WolfPack comes out with an 82-78 win at the Charles Jago Northern Sports Centre.

“It was so hard to get on a run,” Pluzhnikov says in a press release. “We have to find that consistency. We have to get a stop, move on, and stay mentally strong against them.”

Thompson Rivers went on an 8-0 run at the beginning of the final frame but Bilous would miss two free throws for the WolfPack with just 30 seconds remaining, which led to Jovan Leamy scoring for UNBC to tie the game at 70 with less than two seconds left.

“You guys get such a great crowd here. It was distracting,” Bilous says of the UNBC crowd. “I choked a little bit, but I have to get back in the gym and work on those I guess.”

Bilous also has a connection on the UNBC side with him being a teammate of Pluzhnikov's on the Ukraine National U16 and U18 teams.

“He is a smart player. He knows his strengths and he knows his weaknesses,” Pluzhnikov says. “He really knows how to read defenses, and he made some good plays down the stretch."

TIMBERWOLF TOP TEN! Check out ten of the best plays from an amazing weekend series between @UNBCBasketball and @GoTRUWolfPack! A great crowd at @NorthernSport was treated to two classic games, and were the first to see @UNBC's new black alternate jerseys! Check it out! pic.twitter.com/8AWu5C1wKy

With the loss, UNBC now falls to 7-5 on the year while TRU improves to 5-7. The Timberwolves also sit in seventh place in Canada West standings.

Both UNBC squads are back in action at the Charles Jago Northern Sport Centre this weekend (Jan. 11 and Jan. 12) against Manitoba with the women tipping-off at 6 p.m. Friday (Jan. 11) and 5 p.m. the following night.

UNBC men and women's basketball teams victorious in battle against the Spartans
Nov 17, 2018 11:56 AM

The UNBC men's and women's basketball seasons kick off this weekend
Oct 26, 2018 10:12 AM
Comments
We welcome your feedback and encourage you to share your thoughts. We ask that you be respectful of others and their points of view, refrain from personal attacks and stay on topic. To learn about our commenting policies and how we moderate, please read our Community Guidelines.