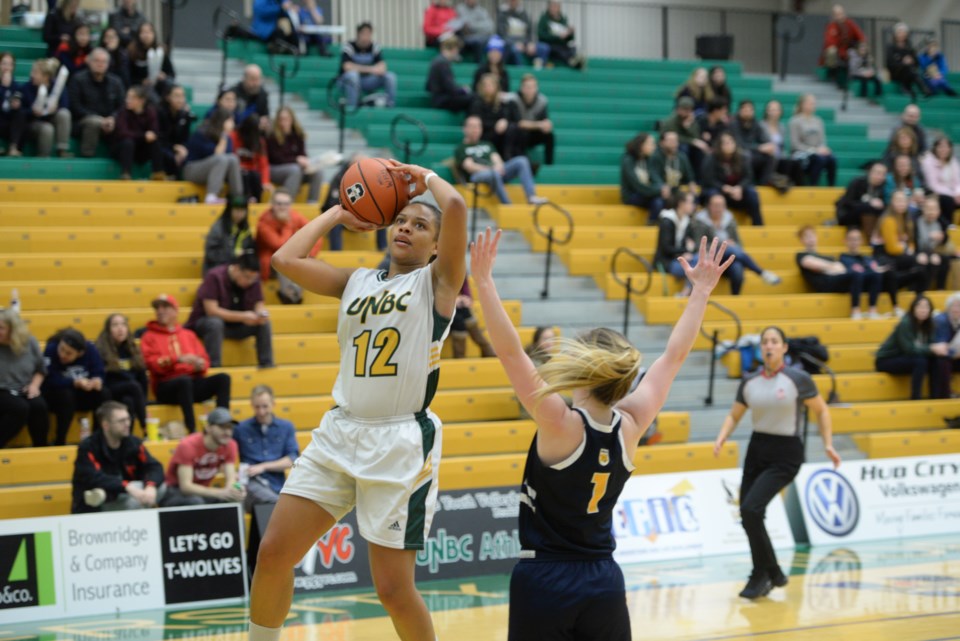 Maria Mongomo has been on fire for the UNBC Timberwolves as of late. (via UNBC Athletics)

'En Fuego' means 'on fire' and UNBC's Maria Mongomo continues to be just that.

Mongomo's performances against the UBC-Okanagan Heat marked the first time a Canada West women's basketball player had done so in eight years, and completed the trifecta last night in a 78-67 victory against the visiting Brandon Bobcats.

The Bobcats came into the matchup with only one win on the year, while the Timberwolves were looking to extend their win streak to three and stay in the playoff picture.

The first quarter was tight with not much wiggle room, but Mongomo took over and scored 11 to give UNBC an 18-14 lead.

The tight play would continue in the second with Emma vanBruinessen dominating the paint for the Timberwolves, scoring easy layups and crashing the boards to grab rebounds.

The Lady T-Wolves started the second half with strong defense, making numerous stops and making the most of their chances with points at the other end.

Mongomo continued to carve Brandon's defence and helped UNBC to a 62-47 advantage with 10 minutes left.

The Bobcats chipped away in the fourth, but the Timberwolves held their ground and came out with a 78-67 win at home.

“We just need W’s, honestly,” said vanBruinessen, postgame. “I don’t think we played awesome. Tomorrow (Jan. 25), if we play our game, I think we can pull off another win.”

With the win, UNBC now holds a 6-9 record and remain in the 12th and final playoff spot.

The two squads go back at it tonight, 5 p.m. at the Charles Jago Northern Sport Centre.

UNBC's Maria Mongomo named Canada West Third Star of the Week after historic weekend
Jan 21, 2020 1:14 PM
Comments
We welcome your feedback and encourage you to share your thoughts. We ask that you be respectful of others and their points of view, refrain from personal attacks and stay on topic. To learn about our commenting policies and how we moderate, please read our Community Guidelines.