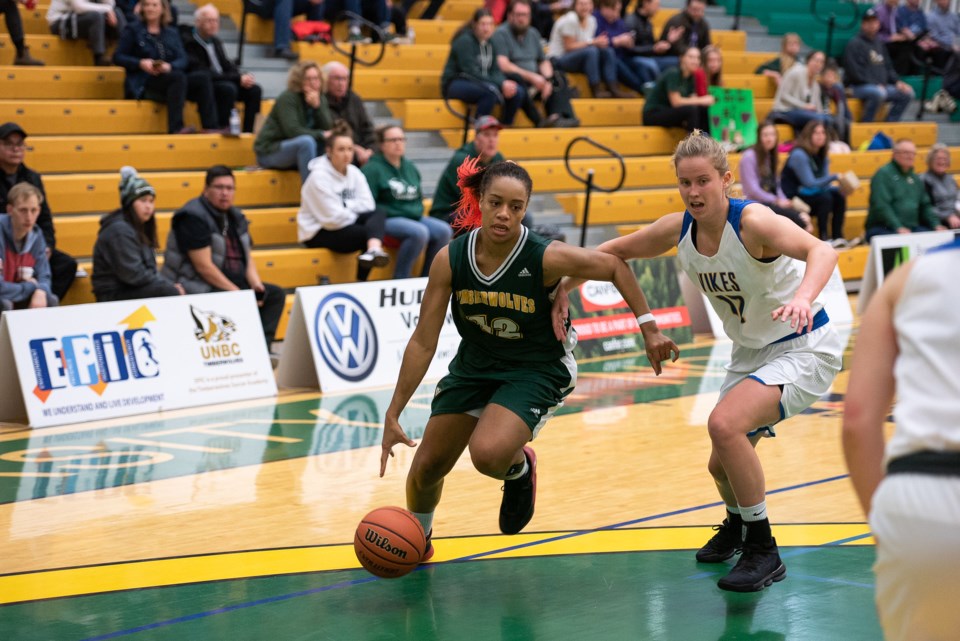 Ave Maria? Maybe not, but we do know one thing... Maria Mongomo is En Fuego!

Mongomo has been recognized by Canada West as its Third Star of the Week after a record-breaking weekend (Jan. 17 and 18).

A massive weekend, @UNBC history made, and now...@CanadaWest recognition for @UNBCWomensBball's María Mongomo! Maria AVERAGED 32.5 points, 11.5 rebounds, 4 steals, and 3.5 assists per game in a big sweep of the @UBCOHeat! Congrats to the Balla from Las Palmas!! #gotwolves pic.twitter.com/I52iGl2Xs9

She did just that, and then some, with a 35-point, seven-rebound, five-steal and two-assist performance in a 104-54 blowout over the UBC-O Heat where she saw 30 minutes of action on the floor.

Former UNBC women's basketball great Vasiliki Louka held the record with 1,498 points before Mongomo moved above her in the second quarter of Friday's game when she sunk a late three-pointer.

HISTORY! Check out the record-breaking points by Maria Mongomo, as @UNBCWomensBBall has a big 2nd quarter, and leads @UBCOHeat 46-28 at the half! pic.twitter.com/8wpoRHmUTV

She would follow-up her brilliant Friday night performance on Saturday with 30 points, 16 rebounds, five assists and three steals in 39 minutes of action and lead the women to their second straight win and the weekend sweep in Kelowna.

This season to date, Mongomo currently sits fourth in points-per-game in the conference with 18.8, as well as rebounds-per-game at 9.3.

The Lady T-Wolves sit 12th in the Canada West standings with a record of 5-9.

Five UNBC basketball players reach new heights despite getting swept in Calgary
Jan 6, 2020 10:45 AM
Comments
We welcome your feedback and encourage you to share your thoughts on this story. We ask that you be respectful of others and their points of view, refrain from personal attacks and stay on topic. To learn about our commenting policies and how we moderate, please read our Community Guidelines.