United Way, B.C. Cancer Centre of the North providing menstrual products in Prince George to those in need 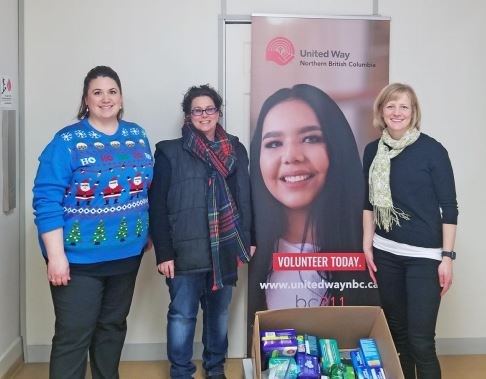 The generosity of Prince George has once again come to the aid of those in need.

The United Way of Northern B.C. (UWNBC) and members of the Health Sciences Association (HSA) at the B.C. Cancer Centre of the North teamed up to collect funds and menstruation products, including pads, tampons and Diva cups, to support those in the community while also raising the profile about the need for such products.

Together, both parties ran the Stomp Out Period Poverty drive.

“It was my pleasure to coordinate this fundraising initiative at BC Cancer," HSA Steward – BC Cancer Centre of the North Lyndsay Van der Meer said in a news release.

"The Health Sciences Association of BC really supported me in putting on the Stomp out Period Poverty Campaign, making it possible for me to focus on engaging with my BC Cancer colleagues. Staff members really jumped on board with this very worthy cause by making donations of both supplies and money."

The team ran the campaign from Nov. 28 to Dec. 13 and collected $186 through an online fundraiser, which will be spent specifically on menstruation products.

The money, along with items collected, were delivered to Executive Director of Prince George Sexual Assault Centre Lynnell Hailkowski to give to those in dire need of such necessities.

“It’s such an honour to be part of such crucial initiatives to help connect the needs of our community with incredible donor partners like the HSA, BC Cancer - Centre for the North chapter," UWNBC Interim Executive Director Trista Spencer added in the release.

"Thank you to the entire group for your efforts in collecting products and funds to support this often overlooked area of need. Menstruation isn’t a choice, and no one should have to choose whether or not to have the amenities they need to care for themselves. This initiative will ensure many in our community will no longer have to make that choice."

Kerri Einarson will represent Canada in Prince George after winning 2020 Scotties Tournament of Hearts
Feb 24, 2020 7:15 AM
Comments
We welcome your feedback and encourage you to share your thoughts on this story. We ask that you be respectful of others and their points of view, refrain from personal attacks and stay on topic. To learn about our commenting policies and how we moderate, please read our Community Guidelines.