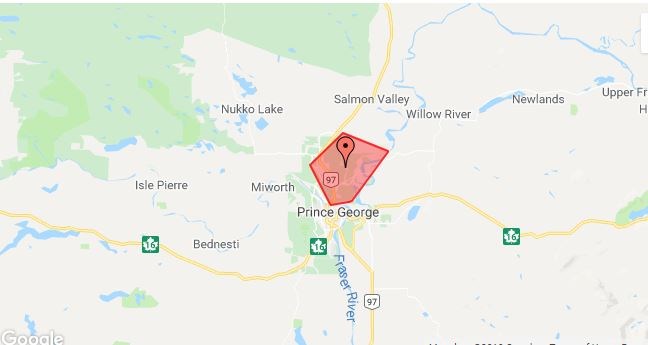 More than 5,100 residents had a blackout for nearly an hour this morning (March 11).

The cause of the outage remains under investigation.

Nearly 70 homes are still in the dark, but this is because of a planned power outage by B.C. Hydro.

This includes those living east of Kelly Road, west of Madill Road, south of the Hart Highway, and north of Austin Road.

A large power outage has occurred in Prince George.

More than 5,100 B.C. Hydro customers in the Hart region and further north are experiencing a blackout as of 9:48 a.m. this morning (March 11).

According to the power company, the outage, which is under investigation, ranges from north of P.G. Pulp Mill Road to south of Turner Road and west of Shelley Road.

Crews are heading to an outage affecting 5120 customers in #CityofPG. They'll share updates on our mobile site: https://t.co/0y6rYQPsZO pic.twitter.com/L8sS7JM5dy

Attempted theft of seaplane ends with collision in Vancouver harbour
Feb 21, 2020 8:25 AM

Diamond Princess evacuees arrive for quarantine in Canada
Feb 21, 2020 7:45 AM
Comments
We welcome your feedback and encourage you to share your thoughts on this story. We ask that you be respectful of others and their points of view, refrain from personal attacks and stay on topic. To learn about our commenting policies and how we moderate, please read our Community Guidelines.