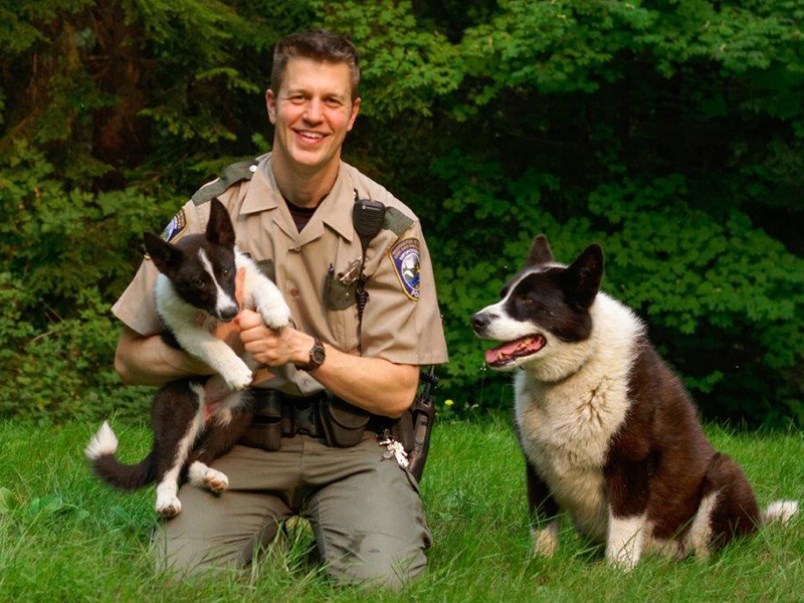 With a marked rise in the number of conflict animals being euthanized throughout the province, a B.C.-wide petition asks conservation officers to use a special breed of dog to help relocate the animals. The Karelian bear dog program run by Washington State Department of Fish and Wildlife Captain Alan Myers started a decade ago and has an 80 per cent success rate. (via Contributed)

In Powell River, B.C., bear sightings are an everyday occurrence.

Bear families have lived in the region, bred and raised their families for generations, according to B.C. Conservation Officer Service officer Andrew Anaka.

However, complaints are up significantly this year, and with that the number of bears being killed.

Conservation Officer Service statistics report the total number of bears destroyed this June was 98 compared with 74 in the same period one year ago.

In response to the recent shooting of a mother and two cubs in Coquitlam, resident Alexandra Marinets started a petition asking B.C. Conservation to: “Stop killing bears-relocate using Karelian bear dogs instead.” It currently has more than 10,000 signatures.

Marinets refers to programs using the dogs in Washington State and Alaska.

Captain Alan Myers of the Department of Fish and Wildlife in Washington is in charge of its Karelian bear dog program, which started over a decade ago with one of the Finland-bred dogs.

“I now have four dogs within the enforcement program,” said Myers. “Two of them are just north of Seattle, one is just south of Tacoma and one is in Spokane.”

It has proven to be about 80 per cent effective in permanently relocating the conflict animals, he added. When a bear is released from a trap the officers shoot bean bags at it and then release the dogs to chase it.

“With the non-lethal removal tool, we’ve saved hundreds and hundreds of bears and cougars throughout the years,” said Myers.

The state program is 100 per cent funded by private donations. Although local conservation officers declined to comment, the B.C. Conservation Officer Service did issue a statement:

“At this time the BCCOS does not use Karelian bear dogs, but employs other non-lethal bear deterrents such as short distance relocations, hazing and noise deterrents, as well as bean bags and rubber slugs. However, these non-lethal deterrents rely on bears not becoming food-conditioned. Once a bear becomes food conditioned, these non-lethal methods become less impactful and COS is forced to use more drastic methods in order to ensure public safety. The COS continues to emphasize that securing attractants in our communities is the best means to ensure bears do not become conditioned to human food sources.”

Powell River WildSafeBC coordinator Evelyn Kirkaldy said the concept of implementing dogs is interesting but definitely not a quick fix.

“Karelian bear dogs can be a part of an effective program,” she said. “The trouble is you have to chase the bear away somewhere, and where are you going to chase it? Into the bush where there’s people hiking? Perhaps in more remote areas, but within the city that’s going to be really tough.”

The best way people can help save bears and other conflict animals is by keeping their property free of attractants, she added.

“People’s role in saving bears’ lives is imperative,” she said. “The bottom line is even if this was the right area to make [the bear dog program] work, if people don’t manage their attractants it’s just a big waste of resources.”

“That’s the key here,” he added. “Our function is not just to help people solve an animal problem, our mission is to help the animals solve a people problem and that problem will persist as long as those bad habits continue.”

Myers said the main hindrance to the program’s expansion was finding people able to train the capricious dogs.

“This is not like your typical police K9 dog,” he said. “These are a very hardheaded, difficult animal to train and the challenge is finding handlers who are equipped with the patience and training background to be able to handle this.”

Known affectionately by the officers as “land pandas” for their black and white appearance, Myers said the animals are very charismatic and social.

“But when a bear or cougars are in their vicinity they flick a switch and turn into an amazing hunting animal,” he added.

For Marinets, exploring all options that allow animals to live is everyone’s responsibility.

“Bears were here before us,” she said. “It is our fault the garbage is left behind and attracts them, but it is up to us to care enough to preserve their lives and make sure they are not simply shot because we were careless.”