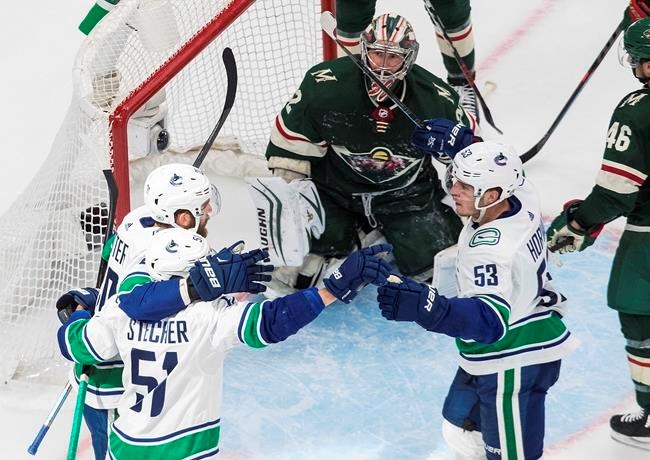 The Vancouver Canucks battled back from deficits three times Friday (Aug. 7) to beat the Minnesota Wild 5-4 and qualify for the NHL playoffs for the first time since 2015.

Chris Tanev scored on a wrist shot from the blue line 11 seconds into overtime at Rogers Place to give the Canucks a 3-1 win in the best-of-five qualifying series.

The Wild have now missed the post-season for two consecutive seasons, with first-round exits in each of three seasons before that.

Minnesota was hampered by the loss of top defenceman Ryan Suter, who did not dress after playing big minutes in the first three games. The league is not releasing injury information or any individual COVID-19 test results.

Vancouver goalie Jacob Markstrom, whose stellar play in the regular season made it possible for the Canucks to make the post-season tournament, stopped 24-of-28 shots but fought the puck all night, allowing two sharp-angle short-side goals and giving up juicy rebounds.

Minnesota opened the scoring about three minutes into the first period. Kunin, on the power play, took a pass on the end line from Mats Zuccarello, crashed the net, and jammed the puck over Markstrom's goalpad.

Pearson tied the score at the 12:52 mark, corralling a perfect stretch pass from Tanev at the left face-off dot and releasing a wrist shot that banked off the far goalpost and in.

Minnesota responded 40 seconds later. Staal, standing below the face-off circle to Markstrom's right, took a pass from Marcus Foligno, who was behind the net, and sniped a puck past Markstrom's ear on the short side.

In the second period, the Wild went up 3-1. Eriksson Ek grabbed a rebound off a point shot and lifted the puck over Markstrom.

The Canucks immediately cut the lead to 3-2 when Hughes's point shot got deflected high up in the air and landed behind Stalock, allowing Sutter to jam it over the goal line.

Hughes tied the game just over a minute later on the power play, wristing the puck from the high slot through heavy traffic and in.

With under a minute to go in the period, Sturm flew in on the left wing and fired a wrist shot near the endline that managed to elude Markstrom under the arm.

The Canucks tied the game late in the third period, when Pearson fought off a check behind the net and fed Horvat for a one-timer in the slot, setting the stage for overtime.

The series was a case of Hughes and the Canucks' high-flying top six forwards against the smothering team defence of the Wild.

Hughes, the Calder Trophy nominee, led all rookies in scoring in the abbreviated regular season (eight goals, 53 points) and kept the hot hand in the playoffs with a goal and five assists.

Vancouver's top six didn't score a lot but they scored enough. Brock Boeser, Bo Horvat and Pearson each had two goals while Elias Pettersson and J.T. Miller had one each.

Winger Tyler Toffoli didn't play since Game 1, out with an apparent foot injury.

It was a close-checking, low-scoring series dominated by penalties that continued early in the game when Vancouver's Jake Virtanen squared off and scrapped with Minnesota's Ryan Hartman.

The tournament was created after the NHL prematurely ended the regular season in mid-March due to the COVID pandemic.

Rise and shine, Prince George!
Sep 30, 2020 6:05 AM
Comments
We welcome your feedback and encourage you to share your thoughts. We ask that you be respectful of others and their points of view, refrain from personal attacks and stay on topic. To learn about our commenting policies and how we moderate, please read our Community Guidelines.