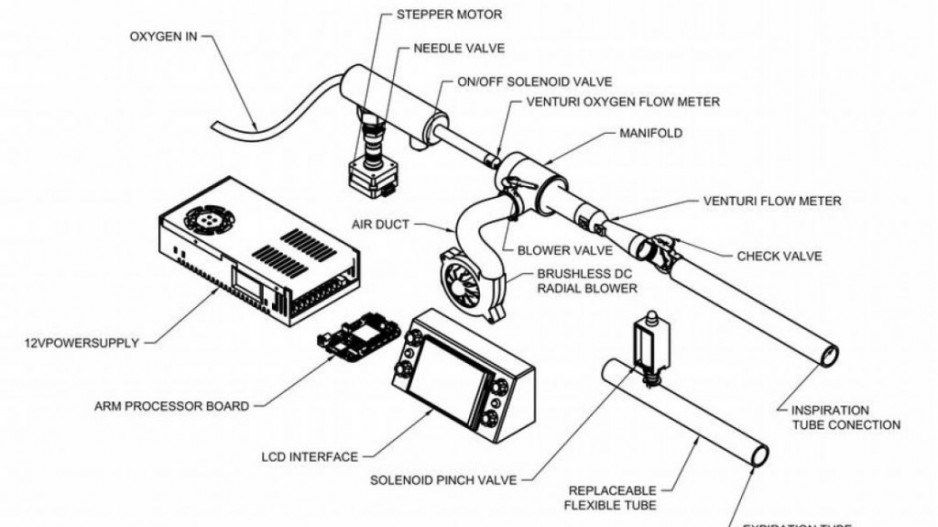 The design of the Pantheon ventilator consists of 41 components and is much less complex than traditional systems. (via submitted)

With supply chains in flux and large gatherings banned across North America, Corbin Lowe sees throngs of idling manufacturing plants soon being revived in the fight against the COVID-19 pandemic.

The CEO of Vancouver-based Ocalink has spent just over a week working with a team of engineers, suppliers and manufacturers on a strategy to assemble ventilators that are much less complex than current models but meet current medical standards.

“From the very beginning we said we need a design that’s ultimately scalable to a million units in 90 days and anything less just isn’t very useful,” Lowe said.

The Emergency Ventilator Project’s design — which got underway March 19 — consists of only 41 components.

The cost of producing each unit of the Pantheon ventilators has not been finalized but Lowe said he hopes they eventually tally at “a few thousand dollars.”

Production would require 12-person assembly lines to allow for physical distancing in plants already set up for medical-grade equipment manufacturing.

“It does only exactly what the respiratory department needs for this specific virus and it doesn’t do anything extra,” he said, likening the idea to a microwave that only has an on-and-off switch — no special settings for popcorn.

His team built the device with input from Vancouver Coastal Health (VCH) to ensure it meets all the needs of health-care professionals dealing with the pandemic.

The next step is awaiting regulatory approval from health authorities including Health Canada.

It can be an arduous process but Lowe hopes VCH’s support will see it fast-tracked by Friday (March 27) evening in the wake of the COVID-19 crisis.

One assembly plant capable of supporting the project has been identified in Calgary, and Lowe said the assembly process can be “copy and pasted” across other facilities throughout Canada.

But it will take government funding to see that the ventilators are manufactured, said Lowe, who acknowledged traditional financial institutions likely wouldn’t back such a capital-heavy project within the time needed.

'We must demand change:' Canada's first black police chief supports demonstrations
Jun 5, 2020 3:05 PM
Comments
We welcome your feedback and encourage you to share your thoughts. We ask that you be respectful of others and their points of view, refrain from personal attacks and stay on topic. To learn about our commenting policies and how we moderate, please read our Community Guidelines.