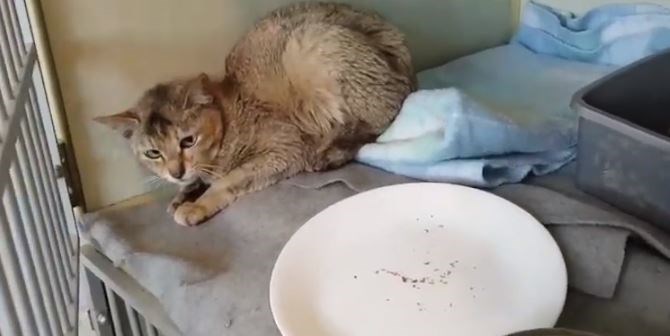 It's still a story of awe that a cat survived over three weeks in a 40-foot shipping container and ended up in Prince Geoge.

The cat came from Shenzen, China (via Vancouver), with no food or water. SPCA staff say it is believed the six-year-old feline survived by drinking condensation inside the container.

A Prince George auto glass distribution company found the cat among pallets, as well as shredded cardboard and styrofoam, inside the container.

When taken to a vet, she weighed in at just over three pounds and will remain in quarantine for now.

"We are extremely grateful for all the support from the public for Stowaway Kitty," Manager of Animal Centre Services at the North Cariboo District SPCA Alex Schare tells PrinceGeorgeMatters. "We knew right away that this was a fascinating story, but we did not expect it to go quite as viral as it did. The generous support of our donors will ensure that Stowaway Kitty receives all the care she needs and we thank each and everyone who contributed."

If her medical costs and cost of care is less than is raised in her name, additional funds will provide care for other animals

They're now also currently looking for names for the fluffy companion until 10 a.m. on April 12.

B.C. SPCA looking for name suggestions for stowaway cat that arrived in Prince George
Apr 9, 2019 1:39 PM
Comments
We welcome your feedback and encourage you to share your thoughts. We ask that you be respectful of others and their points of view, refrain from personal attacks and stay on topic. To learn about our commenting policies and how we moderate, please read our Community Guidelines.