UNBC Lab Animal Attendant says those who find young fawns in the grass should "leave them alone"
Jun 11, 2019 4:24 PM By: PGMatters Staff
Previous Next
June the "rockstar" deer and mother, feeds her two unnamed fawns at the UNBC campus this week.
Expand

A star was born on the UNBC campus in Prince George recently.

Well, make that two stars, from a star mom.

Her name is June, and she is a deer who has been coming to the courtyard at UNBC for three years now, to give birth to her babies.

"She had one the first year, and then twins last year, and twins the year before," says Sianne Vautour to PrinceGeorgeMatters.

She's a Lab Animal Attendent at the university, and has been working in the animal health field for fifteen years. 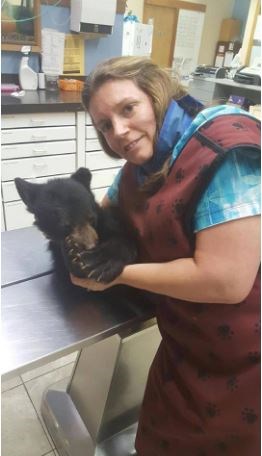 Sianne Vautour, x-raying a bear cub in her former capacity as an Animal Health Technician at Ospika Animal Hospital. (via Sianne Voutour)

Vautour saw the deer give birth in her usual spot, the UNBC Courtyard, at 3 p.m. on Monday (June 10).

"We knew she was coming back, she comes back every year," Vautour says, adding that staff knew June had returned when they arrived to work that day and saw that the courtyard area had been cordoned off with signs and tape by Security staff.

"We watched her in labour yesterday, we could see her panting and having contractions. But everyone's healthy, she's an awesome mom."

Vautour says that there had been some concern among the staff that June wouldn't return this year, because of ongoing construction at the campus.

But apparently, June hardly noticed the sounds of hammering and belt sanders, leaving the little spotted fawns to sleep as she pranced her way around the campus, presumably relieved to be free of a bellyful of babies.

"They looked like two little stones in the grass, someone almost stepped on them!" She adds, chuckling.

Vautour says that this practice of  periodic separation is an entirely natural safety precaution among deer, as "if she's standing there, she's visible, and predators can find her and them."

When Vautour worked as an animal health technician at a local veterinary clinic, she says that people used to bring in baby deer frequently, thinking they were abandoned, "but they're not! Mom has just left to forage!"

June the deer seems to feel particularly safe leaving her babies at UNBC, and comfortable with the attention she attracts.

"Every year, people stare through the courtyard windows, and over the railings at her," says Vautour. "She's a rockstar, she's used to it. She's just like, whatever."

As of Tuesday, June has moved her babies to the Nursing building.

She will take her fawns to the nearby forest in a few days, when they are strong enough for the journey, and they will do so in style:

"The big security guys came out with cones and ribbons, blocked off roads and areas, all so that they make it where they need to go safely,"

Says Vautour. "They're just celebrities here! We just hope she comes back next year."

Sources say Canada, U.S. likely to extend mutual travel ban into late August
Jul 14, 2020 9:05 AM
Comments
We welcome your feedback and encourage you to share your thoughts. We ask that you be respectful of others and their points of view, refrain from personal attacks and stay on topic. To learn about our commenting policies and how we moderate, please read our Community Guidelines.