War veteran was declared dead — but he had the last laugh 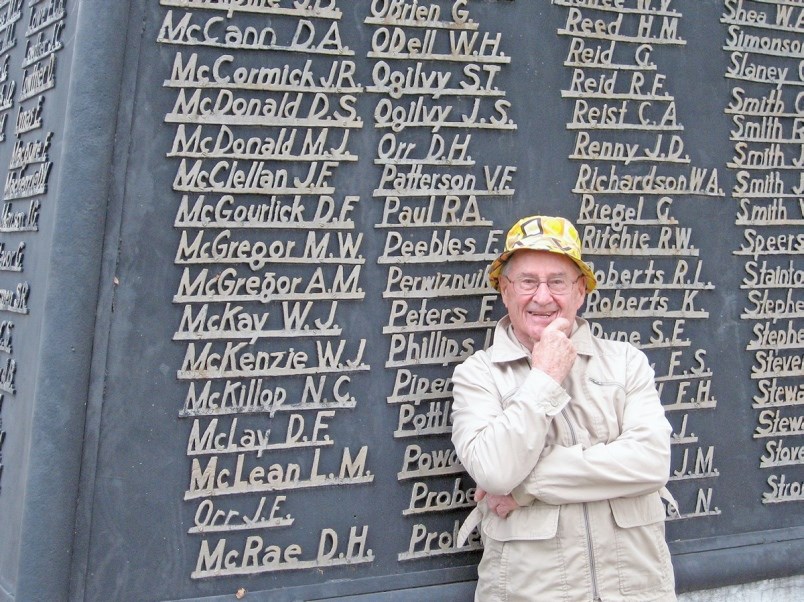 In 2006, Donald Francis McGourlick, then 85, at the cenotaph in Moose Jaw Sask. which has his name inscribed on it. McGourlick died in 2012. (via Submitted)

Last Nov. 11, Jordan Watt hauled himself into a Lancaster bomber — just like his grandfather had 75 years previously — and took to the skies.

The Victoria lawyer was part of a flypast, rumbling over Remembrance Day ceremonies in Hamilton and other southern Ontario cities.

Watt wanted to fly in the Lancaster on Remembrance Day to pay tribute to his grandfather Donald Francis McGourlick, who died in 2012 at the age of 91.

“My sister and I just know him as the best grandpa. He made hockey rinks and took us fishing and camping.

“My mum died when I was 14 and it was super hard as a kid dealing with the loss of your mother. But it was way harder when my grandfather died.”

“Now that he’s gone, I wish I knew more about what he was like when he was young.”

McGourlick didn’t march with the other veterans in Remembrance Day ceremonies. And there was no Second World War memorabilia in his grandparents’ home.

“For whatever reason, it was something he didn’t discuss. We know so much more today than we did then about post traumatic stress disorder. It always struck me that people who have really been involved in combat don’t want to reminisce. I don’t think he wanted to remember.”

After McGourlick’s death, Watt learned more about his grandfather’s life from his grandmother, Jean.

McGourlick was a 20-year-old teacher when he enlisted with the Royal Canadian Air Force in Calgary on April 29, 1941. He was commissioned in 1942 and promoted to flying officer on Feb. 14, 1943.

At 5-foot-7, he was the right size for a tail gunner in a Lancaster bomber. “His RCAF uniform looks like it could fit a child,” said Watt, who has kept the uniform, his grandfather’s flight log and the evasion report McGourlick wrote after his bomber was shot down over France.

At 3 a.m. Aug. 8, 1943, at 10:40 p.m., returning to England from bombing Milan, McGourlick’s Lancaster was attacked by a single fighter over France, igniting incendiary bombs that had been hung up in the bomb bay. The crew bailed out.

Four the seven men died, including the pilot.

McGourlick parachuted to earth 23 kilometres southeast of Dijon. He hit asphalt, and was momentarily stunned. His parachute remained in a tree.

But with the aircraft burning nearby, he didn’t risk trying to extricate it. He buried his life preserver, his harness and his overalls in a gravel pit, then set off on foot. He met no one as he walked through the night.

About 8 a.m., he stopped a man on a bicycle and identified himself. The man told McGourlick to hide, then returned about an hour later with food, a shirt, trousers and slippers. They went into the woods and buried his uniform. The man told the Canadian to head northwest, then left him.

McGourlick used his compass and walked along a hedge until he was about two kilometres from Essey. A man recognized him as an airman and told him to stay hidden until 10 p.m.

For the next three months, McGourlick was shuffled around France by members of the resistance, whose hiding places for him include a castle and the attic of a house that had been commandeered by the Nazis. McGourlick, who spoke no French, was given false papers and assumed a new identity as a deaf-mute florist. His forged Carte d’Identite shows a handsome, moustachioed Frenchman named François Julian Collet.

In October 1943, McGourlick was smuggled out of France under a pile of fish in a commercial fishing boat and spirited back across the English Channel.

Back in Canada, McGourlick had been declared missing and presumed dead. His family received a copy of his death certificate and his name was carved into the cenotaph in Moose Jaw, Sask. Years later, McGourlick was photographed by the monument with a big grin on his face.

“I remember my grandma saying that even though he was presumed dead, she never believed it. She always said: ‘If he could make it to the ground, he’d be OK.’ He was a survivor. His own mother had died in childbirth and his father had died when he was 12. He was the ninth of nine children,” said Watt.

Very much alive, McGourlick returned to Canada where he and Jean planned to wed on Dec. 18, 1943.

On Dec. 17, he received a telegram telling him the air force wanted him back. The couple went ahead with the ceremony and spent a short honeymoon in Montreal.

“He never knew when they were actually going to ship him back to England, so he’d get up in the morning and kiss my grandma good-bye and head off. And then, if he showed up that night, great, if he didn’t. …”

Within a week, McGourlick was back in England, in a plane with a crew whose tail gunner had been killed the previous day.

McGourlick completed 44 missions and was awarded the Distinguished Flying Cross for valour, courage and devotion to duty. “I can’t even imagine what the world was like at that time,” said Watt.

When Watt heard of the opportunity to fly in one of the only remaining operational Lancasters, he knew he wanted to honour his grandfather’s memory.

“I tried to put myself being 21 or 22 and getting dressed in the middle of the night to go and bomb some target. I can’t believe what those guys did, what those kids did.”

When Watt lifted off on a sunny Ontario day, he was confident he would return. When his grandfather flew, he never knew if he would come back.

“It’s just hard to imagine what they went through and the courage and bravery it took. They were kids. I remember when I was that age I was playing junior hockey. What’s the worst that can happen, you lose a game?”

McGourlick had two children and four grandchildren. He returned to university, became a pharmacist and, on the side, flew with search and rescue on the Lower Mainland. He and Jean were married for 69 years.

This Remembrance Day, Watt, 41, will also remember the ones who never came home, the ones who weren’t able to grow old and see their kids and their grandchildren.