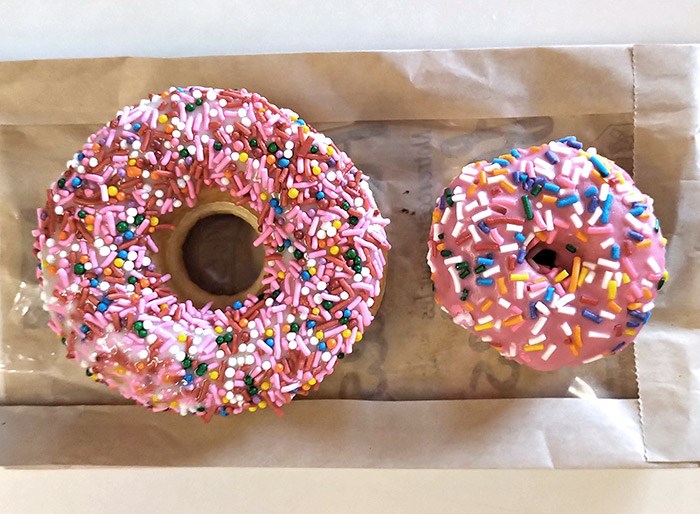 At the end of August, McDonald’s Canada quietly introduced a new menu item, seemingly as a direct shot at one of their major competitors in the coffee space.

And by “making” them, much like Timmy’s they’re not being made fresh in store but are trucked in to a handful of locations across Canada.

In the spirit of our piece where we ate and compared McDonald’s and Ikea’s fish n’ chips so you don’t have to, we picked up six Tim Hortons donuts and six of Ronald’s and put them head to head.

The first thing that strikes you is the presentation. These two are miles apart, and the more appealing one visually is pretty clear.

Traditionally if you’re getting a half a dozen donuts you’re walking out of the store (or the drive-thru in this case) with a cardboard box.

The McDonald’s bag, with donuts in bags inside it, lacks pretty hard in the charm department. Especially as it sits next to a nice Tim’s box.

However it would be pretty convenient if you’re driving to just be able to shovel a donut in your mouth, using the bag to hold it without getting icing on your steering wheel.

Don’t try to tell me you haven’t ever done that with their french fries during a break in traffic when you hope nobody can see you. I saw you do it.

The McDonald’s donuts we picked up cost $5.99 for six.

Beyond the price, can you spot the difference in the photo below?

Yes, the Tim Hortons donut on the left is substantially larger than the nearly-Timbit-sized McDonald’s specimen on the right.

The Tims donut costs less and offers more calories, which puts them ahead in terms of value.

THE SPICE OF LIFE

As a donut-forward chain, Tim’s has a load of different varieties on offer.

McDonald’s launched with six different kinds, all of which have an equivalent at Tim’s: strawberry jelly powdered, sprinkle, apple fritter, Boston creme, caramel-filled, and maple.

We got members of our editorial staff to sample one of each donut, and compare them.

Our investigative reporter Jeremy Hainsworth enjoyed Tim’s Boston creme better. Of the McDonald’s one he said it felt “like a hockey puck”, and that “the cream isn’t as creamy.”

Reporter Elana Shepert was also on Team Tim’s. She thought that the Tim’s fritter she sampled was “more moist” and that it tasted “less stale” than Ronnie’s.

Managing Editor Lindsay William-Ross also thinks Tim’s takes the cake. Her thoughts are that the “texture and flavour of Tim’s is better.”

Reporter Elisia Seeber liked how “the sprinkles are crunchy” on the Tim’s donut she ate, and is firmly on Team Tim’s.

And lastly, my opinion is that it’s obvious that Tim’s makes a better donut. They’ve been doing it for decades, and we should probably cut McDonald’s some slack and see if they can’t catch up.

Sean Robson chosen as 2020 candidate for BC Libertarian Party in Prince George-Valemount
Sep 26, 2020 12:32 PM
Comments
We welcome your feedback and encourage you to share your thoughts. We ask that you be respectful of others and their points of view, refrain from personal attacks and stay on topic. To learn about our commenting policies and how we moderate, please read our Community Guidelines.