WestJet breaks ranks with carriers to offer refunds to some customers 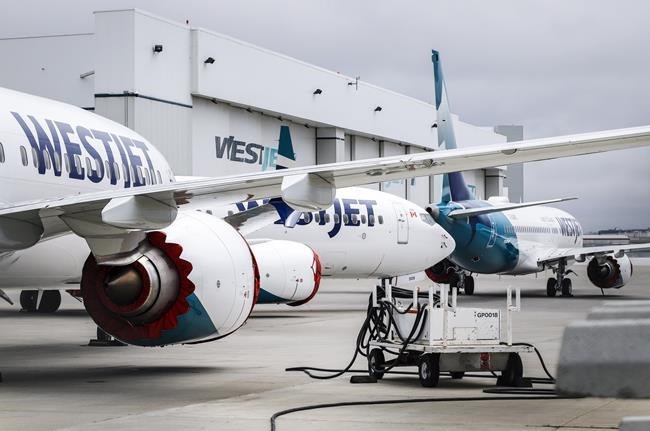 WestJet Airlines Ltd. has quietly changed its refund policy to allow some customers whose flights were cancelled due to the pandemic to recoup their cash.

The move appears to make WestJet the first major Canadian carrier to offer refunds rather than credit to passengers whose trips were called off due to the COVID-19 crisis.

The pivot follows months of backlash as consumer advocates and thousands of passengers continue to demand their money back for services paid for but never rendered.

Three petitions — two were presented to the House of Commons over the past month — with more than 110,000 signatures call for full refunds before any financial aid is handed out to airlines.

WestJet's refund offer, spelled out in a document sent to travel agents and obtained by The Canadian Press, applies to flights that include a U.S. or U.K. city as the destination or origin.

The company said in an email it is reaching out to customers who have already accepted travel credit to alert them to the new option, which applies to all fares and classes but not vacation packages.

The policy does not include flights within Canada or to continental Europe, Mexico or the Caribbean.

"If your client chose to voluntarily cancel their booking, they are not eligible for a refund to original form of payment," with the exception of certain special fares, the memo states.

Transportation authorities in the United States and European Union have required airlines, including foreign ones, to offer refunds for flights cancelled as a result of the pandemic, which has shuttered borders and grounded fleets.

Unlike its American and many European counterparts, Ottawa has also held off on handing out grants or loans particular to the airline sector, turning instead to a wage subsidy accessible to most employers and loans starting at $60 million for large companies.

"The rights of these consumers to a refund and to fair treatment should not be trumped by the private interests of large corporations," the group said in a public letter Thursday. "It is not the consumers’ responsibility to prop up businesses."

WestJet said its previous non-refundable cancellation policy "was what we were able to offer at that time...due to the ever-changing landscape we are faced with.

"We are carefully monitoring the regulatory frameworks in all its operated jurisdictions," it said.

Travel agencies see WestJet's move as a net positive, despite its limited scope.

"We as a travel agency have kind of been stuck in the middle with consumers and clients wanting to get refunds, and we don’t have their money but they don’t understand that, and if we can we’ll refund them."

Customers who want their money back will have to reach out to the agency, rather than receiving funds automatically, she said.

The policy change memo landed in her inbox on June 1, she said.

The refunds apply to U.S. and U.K. flights that were scheduled between March 1 and June 30, with a processing time of four to six weeks, according to the document.

Last month, Air Canada revised its cancellation policy amid mounting customer frustration, offering travellers the option of a voucher with no expiration date or Aeroplan points if the airline cancels their flight due to the virus.

The new policy — the previous one capped travel vouchers at 24 months, with no Aeroplan option — applies to non-refundable tickets issued up to the end of June, with an original travel date between March 1 and June 30.

Prime Minister Justin Trudeau said last month the government needs to have "some very careful discussions with airlines" as well as Canadians to maintain a balance where travellers are "treated fairly" and the sector stays intact.