Several options on the table regardless of when players take CN Centre ice
Jan 11, 2021 12:35 PM By: Kyle Balzer 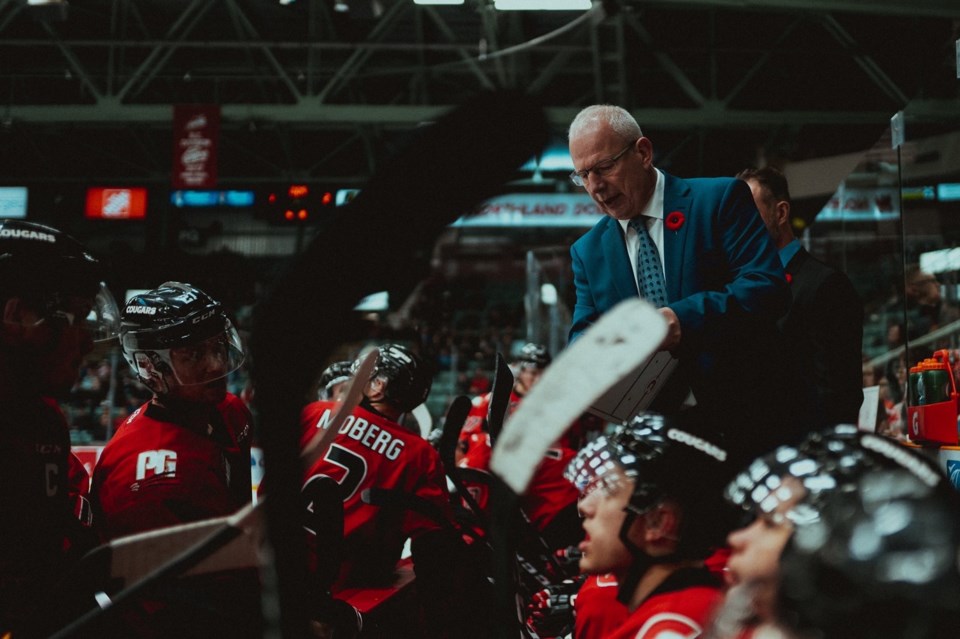 Prince George Cougars Head Coach and General Manager Mark Lamb talks to his players during a timeout against the Victoria Royals at the CN Centre. / Brett Cullen Photography

Excitement is brewing in the Prince George Cougars’ front office and in the halls of the CN Centre.

On Friday night (Jan. 8), the Western Hockey League (WHL) announced an official commitment to hosting a 2020-21 season that will consist of a minimum 24 games, plus playoffs, and a start date that’s still pending approval from health officials across its six jurisdictions.

Regardless of when it starts, current B.C. public health orders formally ending Feb. 5, 2021, this is being made possible by ownership groups and their ongoing partnership with the WHL front office in recognizing that players are in need of some safe, meaningful competition during the COVID-19 pandemic.

This news has led to extreme gratefulness from the Prince George Cougars with each passing minute.

While 24 games may not seem like a lot, General Manager and Head Coach Mark Lamb claims it’s more than enough under the current circumstances.

“It’s something very special in how tight this league is,” he said when asked by PrinceGeorgeMatters.

No official start date is on the table until health authorities in the WHL’s 6 jurisdictions give the green light. B.C. is allowing Canucks to play in Vancouver & reports have indicated the BCHL is considering a hub location for its potential season | #CityOfPG

Lamb says he has a call scheduled with the 21 other WHL general managers this week likely to talk about return-to-play, but says aside from that, business has been usual.

Comparative to the (arguable) timeless classic Groundhog Day, the routine hasn’t changed as WHL clubs have been standing by, going about their day-to-day operations and being ready at a moment’s notice given COVID-19’s uncertainty and with vaccines rolling out, the possibility of taking the ice soon was on the table.

Player safety remains, and always will be, at the forefront of these conversations and Lamb believes with the right plan in place, it’s time to get them back where they belong.

“The main process is getting them in a team environment and what they’re used to. All these players want to do is play hockey,” he said.

After witnessing the 2021 World Junior Hockey Championships, which featured 20 WHL players like Prince George Cougars’ Taylor Gauthier (Canada) and Filip Koffer (Czech Republic), the passion and dedication to the game was on full display.

An extra step to develop their talents and whenever the league is able to start, undoubtedly it’ll be front and centre in a short fight for a championship leading into the 2021 NHL Draft.

While on a video conference call with the media this morning (Jan. 11), Cougars’ Vice-President of Business Andy Beesley appeared very happy in talking about the team’s pending 26th season, albeit as short as it will be.

He credits the WHL and franchise ownership groups for moving this commitment to play forward, noting fans are very deserving of what lies ahead.

“We’re really concerned about our fans, especially for our season-ticket holders,” he said when asked by PrinceGeorgeMatters for a message to share with Rowdy Cats across the region.

“A lot of them are suffering through this because their winters are based around the Prince George Cougars’ schedule. It’s a big part of their social life and their cultural and entertainment package of staying here in Prince George. We are committed to find ways to engage with them [...] we try to keep them updated as often as possible.”

Under B.C.’s public health orders for sports, it’s going to be very likely that teams will play in their own division until a certain point in the playoffs and with no fans in the CN Centre.

This is going to force Beesley and the minds in the Cougars’ front office to come up with unique ways to keep fans as interactive as they can be before, during and after games.

“We’re going to work extra hard on our broadcast presentation both the webcast as well as the radio broadcast, we’re going to work very hard on our social media and just finding other ways. We think we actually have some pretty fun ways to involve the fans too, even if it just means that they're watching on a webcast.”

The WHL’s 2020-21 season could also end up in a bubble situation, but ideally, teams are likely to play in their own arenas on weekends in doubleheader, tripleheader formats to leave room in between for sanitization and preparation for any unfortunate scenario.

The Cougars are also pleading with the public that a season can not happen for them and other hockey teams unless health guidelines are followed.

In B.C., masks are mandatory in all indoor public and retail spaces, no gatherings are to be organized of any size and with those outside your immediate household.

For sports, athletes aged 19, 20 and 21 are allowed to practice with their teams in an amended order by ViaSportBC, but travel remains at a stand still until Feb. 5.

Aside from no starts and a silver medal, World Juniors experience will last a lifetime for Prince George Cougars’ Taylor Gauthier
Jan 8, 2021 2:43 PM