Many of the wildfires of note in the Prince George and Northwest Fire Centre are being held
0
Sep 11, 2018 1:00 PM By: Hanna Petersen 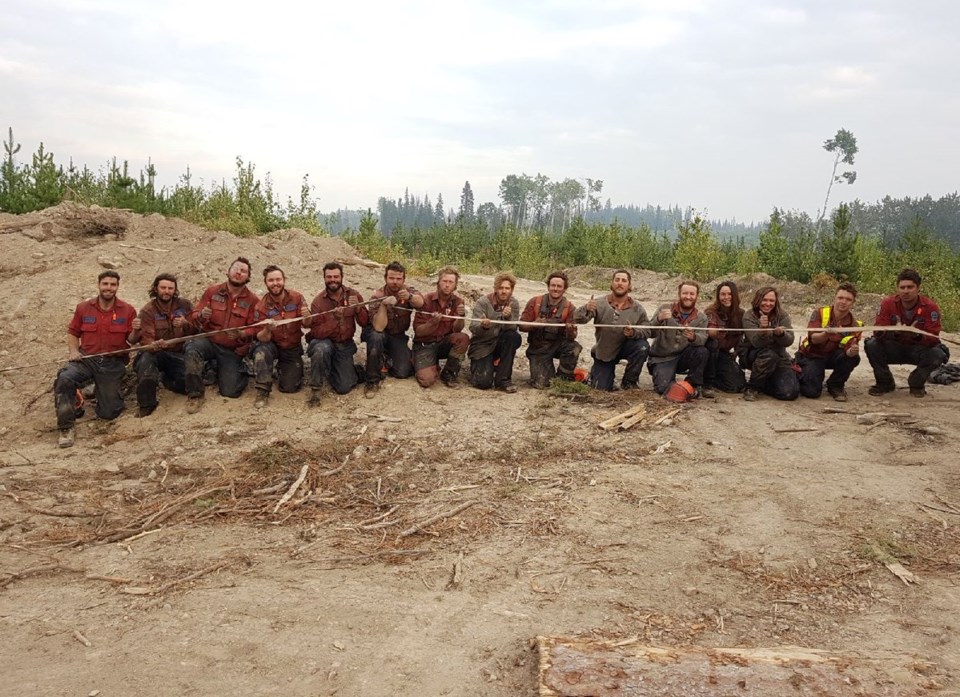 BC Wildfire Unit crew from 100 Mile House give a thumps up after securing the northeast corner of the Shovel Lake wildfire (via Twitter/BC Wildfire Service).

Given the recent wet weather throughout the region, the wildfires of note in the Prince George Fire Centre and Northwest Fire Centre continue to be contained and current evacuation orders have also been downgraded from the Regional District of Bulkley Nechako.

Chutanli Lake Fire, 11km north east of Tatelkuz Lake, is now 95 per cent contained. The Chutanli Lake Fire only remains a wildfire of note because of remaining internal fire activity and is considered being held. The BC Wildfire Service reported as of Sept. 11, 78 firefighters and 12 pieces of heavy equipment are working on the fire, but with current resources the fire is not expected to grow past existing containment lines. The Klukus Forest Service Road is now safe for travel and open to all traffic, however, the Martin Road and the Blue Road remain closed due to fire activity as does the Grey Road.

The Tezzeron Lake Fire, 106 km northwest of Vanderhoof, is now 40 per cent contained with 58 firefighters working on the fire. BC Fire Service says crews are building hand line in the south east of the fire between Dolphin Lake and Hat Road and hotspots are being dealt with on the northeast of Dolphine Lake. The fire received up to 10mm of precipitation in the last few days.

In the North West Fire Centre, the Island Lake Wildfire, near Francois Lake is now classified as being held, meaning that with the resources currently committed to the fire, sufficient suppression action has been taken that the fire is not likely to spread beyond existing or predetermined boundaries under the prevailing and forecast conditions.

Shovel Lake wildfire, 6km north of Fraser Lake, is also designated as being held. Crews are working to mop-up and patrol all active flanks, extinguishing hot spots along the fire's perimeter and working with danger tree specialists and fallers to manage trees that have been compromised by the wildfire and pose a safety risk. Gear is being demobilized off of secured areas throughout the fire. Bucketing helicopters will continue to assist crews in cooling down fire behaviour in active spots. Previous evacuation orders for this fire have been rescinded.

Nadina Lake, 40 km southwest of Burns Lake, is 40 per cent contained. Fire crews are currently mopping up hot spots on the northeastern section of the fire, south of the Tatalrose area. Crews are also working to put out hot spots on the eastern flank of the fire, north of the Wistaria area. Mop up will also continue in the Lund Lake area on Tuesday, as fire crews work to extinguish hot spots in the vicinity of houses and other structures. Direct attack (crews working directly on the fire’s perimeter) continues today, west of Isaac Lake and south of Jesson Lake. A portion of the Evacuation Order issued by the Regional District of Bulkley Nechako was downgraded to an Evacuation Alert on Sept. 10, but an evacuation alert and order remains in place for the south side of Francois Lake.

The Verdun Mountain fire, 9km southwest of Grassy Plains, remains approximately 40 per cent contained. There was widespread precipitation over the entire fire over the weekend. East Ootsa received 17.8 mm of rain, Grassy Plains received 12.8 mm and Burns Lake received 17.6 mm. Crews continued working around homes along the west side of the Eakin Settlement Road. The Bulkley Nechako Regional District has downgraded a portion of the Evacuation Order and Evacuation Alert for this fire.

For more information on current fire conditions visit the BC Wildfire Service.