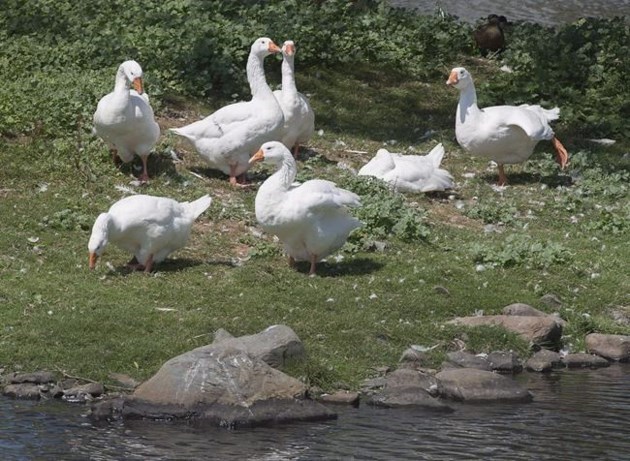 The woman in charge of a rehabilitation centre for wild animals in Nova Scotia says she has identified the aggressive goose that was likely responsible for an unprovoked attack on an 87-year-old Halifax-area woman.

Hope Swinimer, director of Hope for Wildlife, says the bird was among nine resident geese that were removed from Sullivan's Pond in downtown Dartmouth and brought to the centre in Seaforth earlier this week — a seasonal move that usually takes place in December.

They were moved a month early this year after Willow Webb, who uses a walker, was knocked to the ground and pecked by some of the geese on Oct. 25, leaving her with a broken pelvis and elbow.

Swinimer says in the last few days she has noticed that one of the snow-white birds appears to have taken on the role of lead protector of the flock — but she says he may be taking the task a little too seriously.

Earlier this year, the suspect goose was among four new birds added to the existing flock, which long ago became a beloved symbol of the community on the east side of Halifax harbour.

Swinimer says the rogue goose may be separated from the group, but the final decision on its fate rests with municipal staff.

‘Less-than-ideal’: $3.2M enrollment-fund reduction could soon be a reality for Prince George school district
Sep 25, 2020 11:35 AM
Comments
We welcome your feedback and encourage you to share your thoughts. We ask that you be respectful of others and their points of view, refrain from personal attacks and stay on topic. To learn about our commenting policies and how we moderate, please read our Community Guidelines.