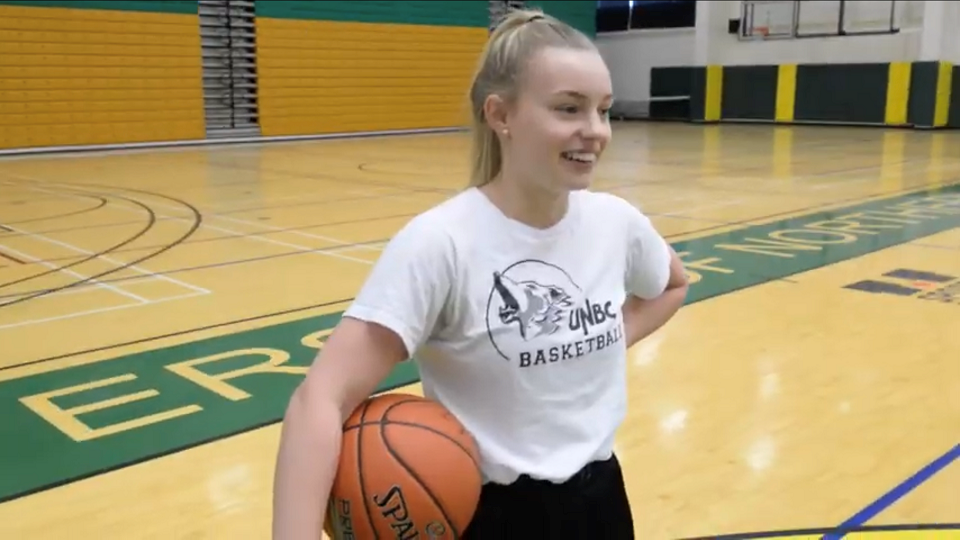 Prince George's Jenna Korolek is choosing to stay home in committing to the UNBC Timberwolves women's basketball team for 2020-21. (via UNBC Athletics)

A Prince George woman is rejoicing with glee as she completes a dream of hers since making her senior high-school basketball team in Grade 10.

Jenna Korolek was sidelined by an ankle injury during last year’s recruiting process, but now, she’s ready to get back in the game after officially signing with her hometown UNBC Timberwolves for the upcoming (likely shortened) Canada West season.

“I think I am going to put it on and say ‘oh damn, this is real, this is so exciting,’” says the 19-year-old in a team release about finally getting to put on a green and gold jersey.

While nursing her ankle back to, what is now, 100 per cent, Korolek hit the books as a UNBC first-year to study health sciences.

During that time, she reached out to UNBC women’s basketball head coach Sergei Shchepotkin, who ultimately invited her to train with the Lady T-Wolves and also noticed her apparent attitude that fit well with his group.

“We are really excited to welcome Jenna to the program. She is a local product, and she is known for her work ethic on the court. She has the right attitude, and I think her speed, grit, and tough defense will be an asset for our team for many years.”

Korolek is a two-time City All-Star since joining the Kelly Road Secondary Roadrunners in Grade 10 and has been on the B.C. basketball map since, earning three North Central Zone All-Star awards.

She won back-to-back Kelly Road MVP and Senior Female Athlete of the Year honours in 2018 and 2019 and now, she claims she’s ready to be part of one of UNBC’s most successful teams in recent history.

“Being a little, tiny school, it just shows the underdog story,” the five-foot-five point guard explains as the women’s basketball team has made it to four consecutive Canada West playoffs.

“If you work hard, you will succeed. We all have the talent up here. They just worked really hard to get where they are. It is really inspiring to be part of a team that wants to work as hard as I do.

“You think of university ball players at this really high level. It is a huge step from high school to university. Coming here, playing with them, they were all so much more supportive, because they know you and want you to get better. It’s just nice to be able to see that I can play. U SPORTS is so much faster and more aggressive, but I think I will enjoy that.”

If Korolek does take the court for UNBC in her sophomore college year, it won’t be until at least 2021.

On Monday (June 8), Canada West announced for sports with two-terms, including basketball, no games would start until Jan. 1, with a decision to be made by Oct. 8, 2020 to carry on with the plan or to cancel the season altogether.