EDMONTON — Alberta politicians return to the legislature Thursday for a sitting that includes a new budget and a politician recall bill.
Feb 24, 2021 3:20 PM By: Canadian Press 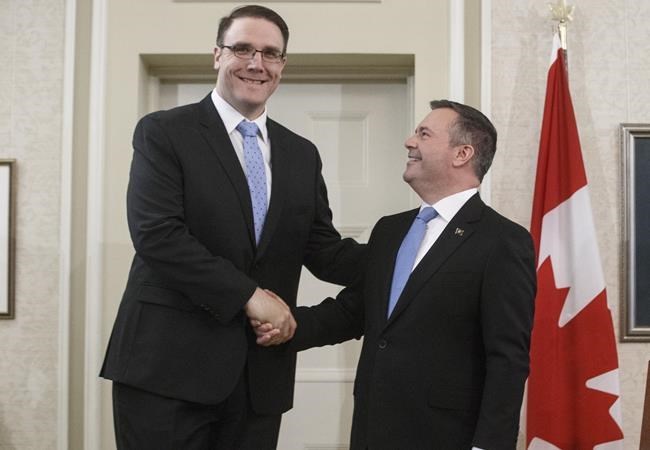 EDMONTON — Alberta politicians return to the legislature Thursday for a sitting that includes a new budget and a politician recall bill.

“Our primary focus as a government in the legislature for the next several weeks will be to get that budget tabled,” government house leader Jason Nixon said Wednesday.

“We see that absolutely as critical, the most important thing the legislature can do right now to help, as we face the COVID-19 pandemic as well as an unprecedented economic situation in our province.”

The sitting is to begin with Finance Minister Travis Toews introducing the budget for the upcoming 2021-22 fiscal year. The province already faces a deficit this year that has ballooned threefold to a projected $21 billion, although Premier Jason Kenney said this week it will be lower.

The sitting is expected to see 18 or 19 bills, said Nixon.

One will propose citizen-initiated referendums. Another will outline how disgruntled residents would be able to recall elected officials — including legislature members, mayors and school board trustees — between elections.

Kenney’s United Conservative government promised during the 2019 election campaign to bring in such legislation. Public interest was renewed after Christmas when several members of the premier's UCP caucus took vacations to tropical hot spots. The government was urging Albertans to stay home and avoid family holiday gatherings to prevent the spread of COVID-19.

Nixon said the bill would allow for recalls in the government's current term, but noted the logistics would have to be worked out with elections officials.

“We will work with the chief electoral officer to accommodate that, but the intention will be to fulfil that platform commitment, that it be put into place all the way this term,” said Nixon.

The sitting will not have a throne speech, normally a tradition to symbolically reset the legislature and give the government a chance to declare goals and plans for the coming year.

Kenney said Tuesday that a throne speech, with its pomp and ceremony, would be challenging in physically distanced times. He said the focus right now is to make sure the pandemic is handled and to revive Alberta’s economy.

Kenney’s government has been pummeled in public opinion polls following a series of gaffes: the Christmas travel, a controversial and now-abandoned plan to pursue coal-mining in the Rocky Mountains, and a shelved plan to off-load some provincial parks.

Calgary-based pollster Janet Brown said erosion of support for Kenney’s UCP is not as dire as some surveys suggest, but she added the government needs to stick to the basics and rebuild trust.

“They just need to regain people’s confidence in their competence” said Brown in an interview. "Nobody voted for Jason Kenney because they liked him or they wanted to have a beer with him, things that were attractive in previous premiers.

The Opposition says Kenney’s government has too often been a step behind on the pandemic. The NDP says the province has failed to provide supports to keep workers and care-home residents safe, and its aid for businesses has been too narrow, too little and too late.

“The health-care system must be central to our recovery,” said finance critic Shannon Phillips.

“I will be looking for a real investment in health care to get us through the pandemic and address the terrible backlog in surgeries and primary health needs.

“Getting through to the other side of the pandemic also means helping small business by offering support for rent, utilities and insurance.”

This report by The Canadian Press was first published Feb. 24, 2021