MONTREAL — Canadian National Railway has reinstated its guidance for 2021 and increased the company's dividend by seven per cent after seeing improved demand for freight in the last three months of 2020.
Jan 26, 2021 3:10 PM By: Canadian Press 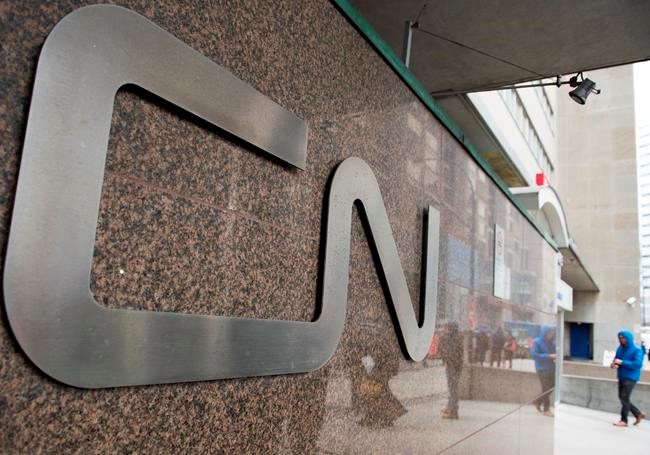 MONTREAL — Canadian National Railway has reinstated its guidance for 2021 and increased the company's dividend by seven per cent after seeing improved demand for freight in the last three months of 2020.

The Montreal-based railway said its net income surged 17 per cent in the fourth quarter to $1.02 billion, or $1.43 per share, buoyed largely by shipments of grain amid an uneven recovery for different areas of the economy.

"We are optimistic about 2021, especially the economy and the GDP of the second half," CEO and president JJ Ruest said on an earnings call.

CN said it is aiming to increase adjusted earnings by high single digits this year, above the $5.31 per share posted in 2020.

"We are more cautious about Q1, especially as it pertains to lockdown and preventive quarantine on our operating employees in the communities where we operate."

Of the markets that CN serves, crude and refinery products continued to see depressed demand, while consumer goods rebounded during 2020, Ruest said, adding that he was pleased with the growth in volume demand during the fourth quarter.

Shipments of potash, lumber and panel were strong, senior executive James Cairns said, with CN setting records for shipments in those categories in December.

"This year, we expect to see continued strength in lumber and panels with strong housing demand as well as repairs and renovations, pushing inventory restocking earlier than usual," Cairns said.

Freight volumes have been recovering from the effects of the COVID-19 pandemic, driven by shipments of grain amid a record crop and elevated demand for food products.

Robert Reilly, CN’s chief operating officer, said that as of December, the company had set all-time records for movement of Canadian grain during 10 consecutive months. He added that January's numbers had already set a record for the 11th straight month.

Maritime shippers have been similarly boosted by demand for grain. The St. Lawrence Seaway Management Corp. reported earlier this month that its volumes had remained flat year over year, with a record grain crop compensating for a decline in demand for petroleum products and inputs for construction and manufacturing, like steel.

CN's operating ratio, an industry metric where a lower ratio means more efficient operations, was 61.4 per cent, an improvement from 66 per cent in the fourth quarter of 2019.

CN Rail was expected to report $1.41 per share in adjusted profits on $3.62 billion of revenues, according to financial data firm Refinitiv. Its net profit was up from $873 million or $1.22 per share in the prior year.

The dividend is increasing to 61.5 cents per share on March 31 to shareholders of record as of March 10. The railway will repurchase up to 14 million shares over the next year.

This report by The Canadian Press was first published Jan. 26, 2021.

Companies in this story: (TSX:CNR)