FRANKFURT — The European Central Bank held off from strengthening its current economic stimulus but its President Christine Lagarde said there was “little doubt” that more action would be coming at its December meeting as surging coronavirus infectio
Oct 29, 2020 8:35 AM By: Canadian Press 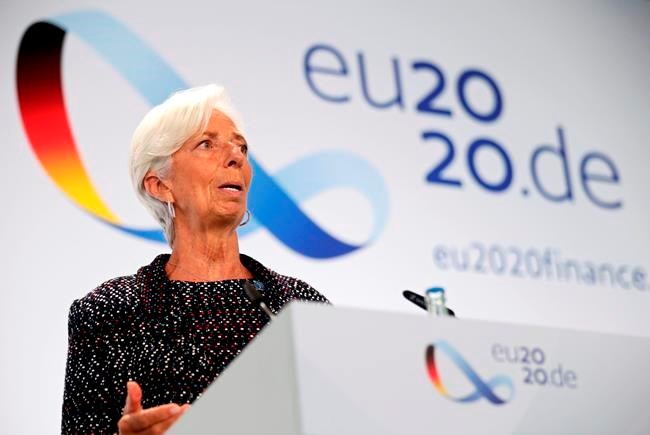 FRANKFURT — The European Central Bank held off from strengthening its current economic stimulus but its President Christine Lagarde said there was “little doubt” that more action would be coming at its December meeting as surging coronavirus infections and new restrictions on activity threaten Europe’s economy.

Lagarde said Thursday that recent data show the economy “is losing momentum more rapidly than expected” and that there had been “a clear deterioration in the near term outlook.”

The bank's staff is already working on a “recalibration” of the bank's stance ahead of the Dec. 10 meeting, said Lagarde.

“We have little doubt... that the circumstances will warrant the recalibration and the implementation of this recalibration," Lagarde said.

The bank's promise to review its position in December came in an unusual introductory paragraph to its regular statement about bond purchases and interest benchmarks. The ECB said it will assess the dynamics of the pandemic and prospects for vaccine rollout as well as new staff estimates about inflation and growth. hat would lead to “a thorough reassessment of the economic outlook” at the Dec. 10 meeting.

Lagarde said that “we are looking at everything” across the bank's set of policy tools such as interest rates, bond purchases and cheap loans to banks.

As expected the bank made no change to its 1.35 trillion ($1.58 trillion) pandemic emergency bond purchase program, which pumps newly created money into the economy to keep credit flowing to businesses and promote economic activity. Those regular purchases are set to run through the middle of next year. Analysts believe that is one reason the bank could take no action Thursday, since there already more stimulus still in the pipeline.

The ECB’s key goal is to raise inflation toward its target of below but close to 2%, the level considered best for the economy. Inflation was minus 0.3% in September, partly a result of temporary measures such as a value-added tax cut in Germany but also a sign of weaker than optimal demand.

Economy output plunged 11.8% in the 19 countries that use the euro in the second quarter but is estimated to have rebounded in the July-September months by as much as 10% as businesses reopened. Figures for the quarter are to be released Friday.

Europe has been in part sustained by business ties between Germany, its largest economy, and China, where the pandemic hit earlier but has been largely contained, allowing activity to rebound to near normal levels. German auto maker Volkswagen said Thursday it had increased sales in China by 3% in the third quarter over the same quarter in 2019, before COVID-19.

Massive ECB stimulus and new spending by governments has helped ward off turmoil on financial markets and cushion the downturn. Governments have deployed furlough support programs to pay worker salaries if they are put on short hours or no hours but not laid off. That has held down the rise in unemployment, which was 8.1% in August.

Yet prospects for the last three months of the year have worsened as infection numbers have risen, raising the possibility of more anti-coronavirus restrictions.

Germany ordered restaurants, bars and to close their doors Monday, and to keep them closed until December, under what is being called “lockdown light.”

Chancellor Angela Merkel warned of a “difficult winter” in a speech in parliament Thursday.

While industrial firms are doing better, services companies that depend on personal contact have been hard hit. Airlines, hotels, restaurants and other businesses big and small have suffered a devastating drop in activity.