TORONTO — Five things to watch for in the Canadian business world in the coming week: Grocery bill One of Canada's largest grocers will report its latest quarterly results Wednesday. Metro Inc., as well as competitors Loblaw Companies Ltd.
Aug 9, 2020 7:00 AM By: Canadian Press 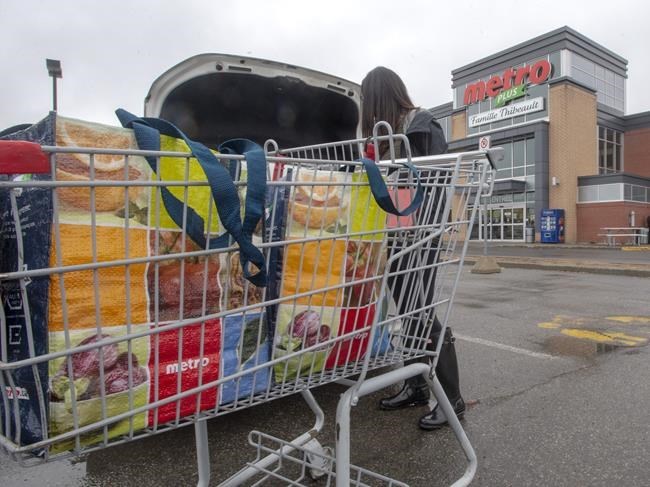 One of Canada's largest grocers will report its latest quarterly results Wednesday. Metro Inc., as well as competitors Loblaw Companies Ltd. and Empire Co. Ltd., benefited from an initial surge in shopping during the early days of the COVID-19 pandemic, but have also experienced added operating costs from enhanced health and safety measures.

The transportation world faces further reckoning this week, as flight simulator maker CAE Inc. and Chorus Aviation report earnings on Wednesday and Thursday respectively. The pandemic caused major disruptions to their operations as would-be travellers stayed home over much of the second quarter, prompting more than 3,000 layoffs at Chorus — a regional aviation company — as well as 1,000 at Via Rail, whose annual public meeting is scheduled for Thursday.

Statistics Canada will release its new home price index for July on Wednesday. The Toronto and Vancouver resale housing markets experienced strong rebounds from lows experienced earlier this year during the height of pandemic-related shut downs, with Toronto sales the highest of any July on record.

Health-food eatery Freshii Inc. is the latest restaurant chain to release its quarterly results this Friday. COVID-19 forced the industry to shutter dining rooms temporarily, and many restaurant conglomerates and chains reported massive drops in sales as a result. The Toronto-based chain was already struggling before the pandemic and in its most recent quarter, ended March 29, saw a US$2.5-million loss.

A ticket to the movies

Cineplex Inc. reports its second-quarter results Friday. The entertainment company started a phased reopening of its Ontario locations at the end of July. It is also embroiled in a legal battle with U.K.-based Cineworld Group PLC, which had planned to purchase Cineplex for $2.8 billion, but abandoned the deal due to alleged material adverse effects and breaches of contract — claims Cineplex denies.

This report by The Canadian Press was first published Aug. 9, 2020.

Trump went even further than other uber-rich to shrink taxes
Sep 28, 2020 1:52 PM
Comments
We welcome your feedback and encourage you to share your thoughts. We ask that you be respectful of others and their points of view, refrain from personal attacks and stay on topic. To learn about our commenting policies and how we moderate, please read our Community Guidelines.