OTTAWA — Canada and Britain struck a new trade deal on Saturday, allowing the long-standing partners to trumpet a commercial triumph in the face of the economic devastation wrought by the COVID-19 pandemic. The interim deal beat the looming Dec.
Nov 21, 2020 2:26 PM By: Canadian Press 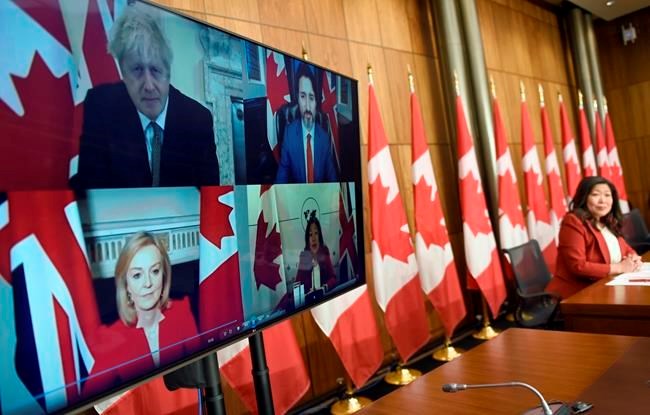 OTTAWA — Canada and Britain struck a new trade deal on Saturday, allowing the long-standing partners to trumpet a commercial triumph in the face of the economic devastation wrought by the COVID-19 pandemic.

The interim deal beat the looming Dec. 31 Brexit deadline, replacing Canada's current agreement with Britain under the European Union that covers trade between the two countries. Saturday’s interim pact, announced amid a virtual gathering of G-20 leaders, is a placeholder that buys Canada and Britain another year to reach a more comprehensive agreement while also warding off a no-deal scenario that would have triggered new tariffs on a range of Canadian exports on Jan. 1

But few details were released about the new interim agreement. Breaking with past practice during trade negotiations, there were no pre-announcement briefings for journalists and no text was released.

"This is a good moment," said Prime Minister Justin Trudeau as he announced the deal during a video news conference with his British counterpart, Boris Johnson.

"Free trade is an important part of the way we're going to bounce back from COVID," Johnson said. "And using that, this is a moment in which to tackle climate change, but also to create hundreds of thousands of jobs in green technologies."

The two leaders spoke on a shared video screen as they prepared to join their fellow G20 leaders at the start of their two-day virtual video summit hosted by Saudi Arabia.

The G20, which includes the non-democratic countries of China and Russia as well as the large economies of India and Brazil, is facing its greatest challenge since it rose to prominence in 2008 to battle the Great Recession – rebooting a global economy decimated by COVID-19.

Trudeau said the new pact sent a strong message about the importance of global trade.

"This continued sign of our collaboration, co-operation, and deep, deep friendship and partnership is really important not just for people in our two countries, but people around the world as well," he said.

Britain's decision to leave the EU after its Brexit referendum means that the Comprehensive Economic and Trade Agreement, or CETA, will no longer apply to the country at the end of the year.

The new deal preserves CETA's key provision — the elimination of tariffs on 98 per cent of Canadian exports to Britain — until a more comprehensive agreement can be reached later. Britain is Canada's fifth-largest trading partner, with $29 billion in two-way merchandise trade in 2019.

International Trade Minister Mary Ng said legislation would be introduced in Parliament soon so the interim deal could be ratified. Ng noted that Canada did not give Britain any additional market access to British cheese, preserving the status quo of the country's supply management system.

Canada's dairy industry has complained loudly in the past about the additional foreign access to the Canadian market under previous trade deals, including CETA and the new Canada-United States-Mexico Agreement.

Ng and her British counterpart, Liz Truss, committed to negotiating a new and more comprehensive agreement in the coming year. Ng said the new deal would explore co-operation around women's economic empowerment, the environment and digital trade.

Conservative trade critic Tracy Gray accused the government of presenting an "11th-hour trade deal" that was temporary and would require more negotiation.

"We will do our due diligence as expected by Canadians to study the enacting legislation for this transitional agreement to ensure it is a good deal for Canada and does not leave Canadian exporters worse off compared to CETA," Gray said.

Mark Agnew, the international policy director for the Canadian Chamber of Commerce, called on both governments to publish the full details of their agreement.

But he said MPs must work towards "prompt passage of the necessary legislation to " provide certainty for Canadian businesses.

Dan Darling, president of the Canadian Agri-Food Trade Alliance, described the deal as "a welcome stop gap." But he also called on the government to fix the market-access obstacles that Canadian producers have faced under the current EU deal.

"For other agri-food exporters, a transitional arrangement simply reinforces a situation that remains unacceptable under CETA," he said.

"That is why we are urging both parties to return to the negotiating table as soon as possible in order to reach a comprehensive and more ambitious pact that removes tariffs and non-tariff barriers."

Goldy Hyder, president of the Business Council of Canada, said the transitional deal will prevent a disruption of Canada-British trade, but noted he wanted to see its specific terms.

"In the future, we believe there is an opportunity to enhance our bilateral trade and investment ties even further with a comprehensive and ambitious free trade deal," Hyder said.

Canada and Britain have operated under an 11-month transition phase since the European country left the EU at the end of January. For Canada, the transition has  meant CETA continued to apply to its trade relations with Britain.

Canadian and British negotiators have been meeting since the summer to strike a new deal.

This report by The Canadian Press was first published Nov. 21, 2020.

The latest news on COVID-19 developments in Canada
Dec 3, 2020 11:02 AM
Comments
We welcome your feedback and encourage you to share your thoughts. We ask that you be respectful of others and their points of view, refrain from personal attacks and stay on topic. To learn about our commenting policies and how we moderate, please read our Community Guidelines.