Canadians torn on scaling back COVID-19 benefits to save money: poll

OTTAWA — A new poll suggests Canadians are torn on whether the federal government should tighten the taps on COVID-19 spending to keep the deficit from flooding the nation's future.
Jul 14, 2020 1:10 AM By: Canadian Press 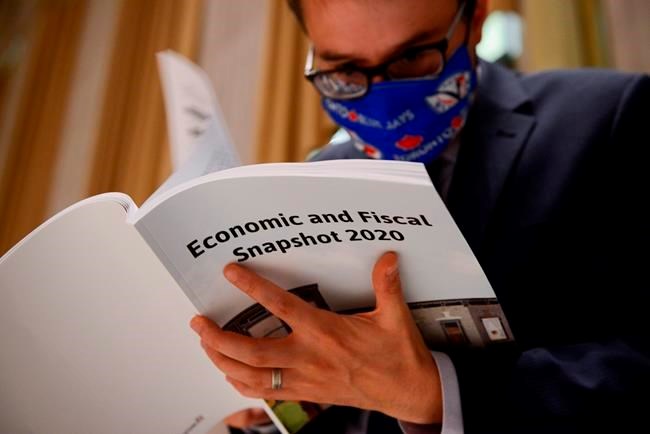 OTTAWA — A new poll suggests Canadians are torn on whether the federal government should tighten the taps on COVID-19 spending to keep the deficit from flooding the nation's future.

The Liberals last week revealed this year's projected deficit sits at $343 billion, driven by an estimated $231.9 billion in COVID-19 spending, so far, and a massive drop in government revenue.

With the deficit at levels not seen since the Second World War, Leger and the Association for Canadian Studies asked 1,523 Canadians whether they felt the government ought to immediately and quickly begin to scale back pandemic support programs to Canadians and to business.

The survey was conducted between July 10 and 12, just after the Liberals released their projections.

It cannot be assigned a margin of error because online polls are not considered truly random.

This week, the Liberal government announced that one of the biggest benefit programs — a federal wage subsidy — will be extended until the end of this year.

It covers 75 per cent of wages, up to a weekly maximum of $847, for eligible companies and non-profits that have lost at least 30 per cent of their revenues.

"Over the last three months you have seen me come out to talk with Canadians about what we're doing to help you and your family, your employer, your local businesses deal with this pandemic," Prime Minister Justin Trudeau said Monday in announcing the extension.

"We're going to continue to do that vital work."

As of July 6, the wage subsidy had paid out $18.01 billion to 252,370 companies. Last week's fiscal and economic update from the Liberals increased the overall budget to $82.3 billion.

The other marquee support program, the Canadian Emergency Response Benefit, is set to expire in the fall.

Of those surveyed, 78 per cent said they were worried about the size of the deficit and how it may affect things in Canada in the long term.

In releasing the deficit projections, the Liberals didn't set out a plan for how or when they might get the books back to balance.

The survey asked respondents which of two routes traditionally use to cut deficits they would support.

This report by The Canadian Press was first published July 14, 2020.

RCMP charge man with falsely claiming involvement in terrorism
Sep 25, 2020 4:53 PM
Comments
We welcome your feedback and encourage you to share your thoughts. We ask that you be respectful of others and their points of view, refrain from personal attacks and stay on topic. To learn about our commenting policies and how we moderate, please read our Community Guidelines.