'Enough is enough. Go home and stay home,' says Trudeau; In The News for Mar. 24

In The News is a roundup of stories from The Canadian Press designed to kickstart your day. Here is what's on the radar of our editors for the morning of Mar. 24. What we are watching in Canada ...
Mar 24, 2020 5:13 AM By: Canadian Press 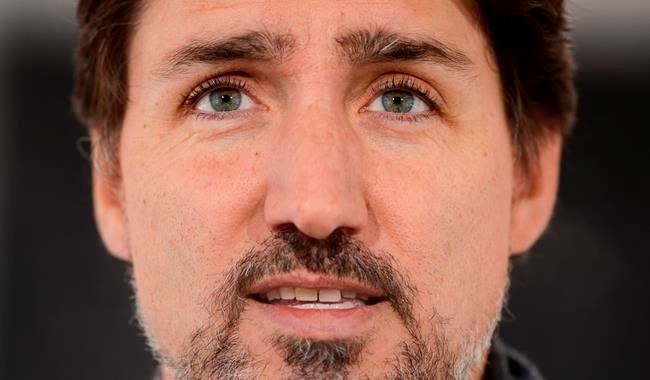 In The News is a roundup of stories from The Canadian Press designed to kickstart your day. Here is what's on the radar of our editors for the morning of Mar. 24.

What we are watching in Canada ...

Prime Minister Justin Trudeau's tone hardened Monday as he warned Canadians there are limits to the government's patience for those ignoring COVID-19 mitigation efforts.

Trudeau said across the country, people need to clearly understand that ignoring distancing protocols puts others at risk, from the elderly to essential workers.

"This is what we all need to be doing and we're going to make sure it happens."

How exactly the federal government will or could make sure it happens has been the subject of debate for days, and will be on the agenda for an expected call later Monday between Trudeau and the premiers of the provinces and territories.

Many provinces have implemented states of emergency, which among other things, give authorities latitude to impose fines or other penalties on those who violate quarantine orders.

Police forces in Canada are getting extra powers, more flexibility and even help from citizens reporting on one another as governments seek to enforce decrees aimed at stopping the spread of COVID-19.

On Monday, Quebec and Ontario ordered shut all businesses their governments classified as non-essential, while Prince Edward Island and the City of Vancouver introduced new penalties for anyone caught violating public health directives.

And in Newfoundland and Labrador, the government is encouraging citizens to report on people or businesses suspected of violating public health directives.

In Montreal, police began operating under a state of emergency as of Monday morning. Police spokesman Andre Durocher said the declaration gives the force the flexibility to make officers work longer hours and it frees up personnel from other departments to conduct patrols.

In Quebec City, police spokeswoman Sandra Dion said officers have been intervening since the weekend to break up "illegal" gatherings indoors and outdoors, and to force businesses to close. Dion said the police in most cases acted after receiving tips from the public.

"It started this weekend," Dion said about the citizen calls. "Until now, people have been collaborating. They leave, or otherwise do what they have to do." She was unable to say how many tips has been phoned in.

Conservative Leader Andrew Scheer says his party will not give the Trudeau government "a blank cheque" to help Canadians weather the COVID-19 crisis.

While Conservatives say they're prepared to quickly approve $82 billion in emergency financial aid and economic stimulus as promised by Prime Minister Justin Trudeau last week, they are balking at a proposal to give the government sweeping new powers for up to 21 months to unilaterally spend, borrow and tax Canadians without seeking Parliament's approval.

The unprecedented proposal is in a draft of the emergency legislation to be tabled in a scaled-down Parliament on Tuesday.

The government has been negotiating with opposition parties to whip the bill quickly through the House of Commons within a few hours, followed by swift approval by the Senate on Wednesday and royal assent immediately after that.

However, the unilateral spending, taxation and borrowing powers included in the draft of the bill shared with opposition parties on Monday may make it more difficult to stick to that schedule.

Ordinarily, the power to impose taxes and allocate the proceeds is in the hands of Parliament, not ministers, and a government falls if the House of Commons won't support its budgetary plans.

As cases of coronavirus continue to rise, President Donald Trump said that he wants to reopen the country for business in weeks, not months, as he claimed, without evidence, that continued closures could result in more deaths than the pandemic itself.

"We can't have the cure be worse than the problem," Trump told reporters at a briefing, echoing a midnight Sunday tweet. "We have to open our country because that causes problems that, in my opinion, could be far bigger problems."

Health experts have made clear that unless Americans continue to dramatically limit social interaction — staying home from work and isolating themselves — the number of infections will overwhelm the health care system, as it has in parts of Italy, leading to many more deaths. While the worst outbreaks are concentrated in certain parts of the country, such as New York, experts warn that the highly infectious disease is certain to spread.

But with the economic impact now snapping into focus and millions out of work, businesses shuttered and the markets in free fall — all undermining Trump's reelection message — the chorus of backlash is growing louder, with Trump appearing to side with them.

"Life is fragile and economies are fragile," Trump said, insisting he could protect both.

What we are watching in the rest of the world ...

Britain has become the latest European country to go into effective lockdown to deal with the threat of the coronavirus pandemic, after Prime Minister Boris Johnson announced sweeping curbs on everyday activity including the banning of any gatherings of more than two people who do not live together.

As well as instructing the public to "stay at home" for all but a few exceptions, Johnson said he was ordering shops that don't sell essential goods, such as food and medicines, to close immediately.

In as an address to the nation as any prime minister has arguably delivered since World War II, Johnson said it was critical to prevent the virus from spreading between households and that police would be authorized to break up gatherings of more than two people from different households in public in order to deal with the "biggest threat this country has faced for decades."

"I must give the British people a very simple instruction," the prime minister said while seated behind a desk. "You must stay at home."

The measures announced mark a departure from the British government's until-now more relaxed approach to the worldwide pandemic, which has stood in contrast to the lockdowns put in place elsewhere in Europe, notably in Italy, France and Spain. Though Britain has already closed schools, bars and restaurants and urged people to stay home, the advice for people to keep their distance have either been ignored or not understood fully enough — concerns over the strategy were stoked over the past weekend when many of the country's open spaces were packed out in the sunny weather.

This report by The Canadian Press was first published on Mar. 24, 2020.