MONTREAL — Preliminary results from the medical examination of a young humpback whale found dead Tuesday after making a rare visit to the Montreal area suggest the animal was struck by a boat.
Jun 10, 2020 12:32 PM By: Canadian Press 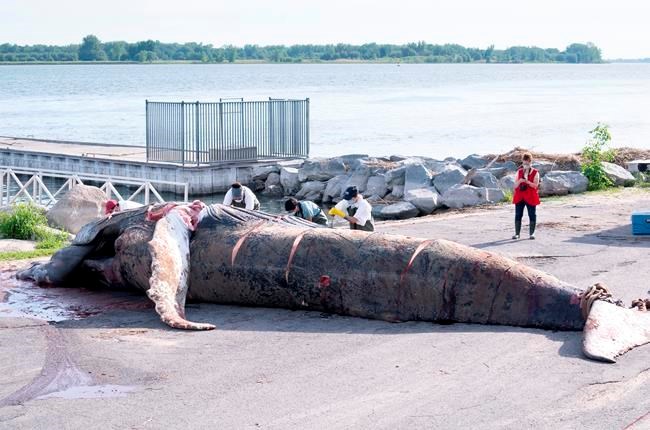 MONTREAL — Preliminary results from the medical examination of a young humpback whale found dead Tuesday after making a rare visit to the Montreal area suggest the animal was struck by a boat.

Stephane Lair, a veterinarian with the Universite de Montreal, said an examination of the 10-metre juvenile female showed signs that could indicate an impact.

"What we can say is the animal presented signs of possible trauma," Lair said Wednesday at the necropsy site northeast of Montreal.

"There was a presence of hematoma, of hemorrhage, that strongly suggest the animal was struck by a boat."

Lair said the diagnosis is a preliminary one and must be confirmed through lab analysis in the coming weeks.

A boat pilot spotted the carcass of the whale just northeast of Montreal Tuesday morning after the animal had drawn crowds in the city's Old Port.

The two- or three-year-old whale spent just over a week in the area after swimming hundreds of kilometres up the St. Lawrence River in late May, but it hadn't been sighted since the weekend.

On Tuesday, the animal was towed to Ste-Anne-de-Sorel, northeast of Montreal, where it was deposited on the shore for experts to examine.

While the cause of death has yet to be officially determined, Lair said there were signs to suggest the animal was healthy.

Videos from its stay in Montreal, including many featuring jumps, suggested the animal was well-nourished and in "good shape," suggesting it had no trouble feeding itself, Lair said.

That makes it more likely that its unusual journey up the St. Lawrence River was due to curiosity rather than illness.

"Young whales are known to have exploratory behaviours and can find themselves outside their sectors. Belugas do it too," he said.

"So we can think in this case it was a young animal that was exploring."

He said the animal's organs were too decomposed to say for sure whether the animal was able to feed itself in fresh water.

Robert Michaud, the scientific director of the Group for Research and Education on Marine Mammals, says ship strikes pose a constant danger to whales and other marine mammals.

He said that authorities had tried to keep boats away from the whale, but they lost sight of it Sunday morning.

While this whale's story had a sad ending, he expressed hope that the legacy of its journey would ultimately be a positive one.

"We hope the journey of this humpback will remind us that there is life, there is magnificent life in the St. Lawrence, it's a fragile life, and we can cohabitate if we take care," he said.

He hoped the story would inspire Quebecers to take better care of the river in order to protect the whale's "brothers and sisters," who are currently making their way up the St. Lawrence gulf and estuary for the summer.