OTTAWA — The Liberal government has introduced legislation aimed at making it easier for intolerably ill Canadians to get medical help to end their lives.
Feb 24, 2020 3:43 PM By: Canadian Press 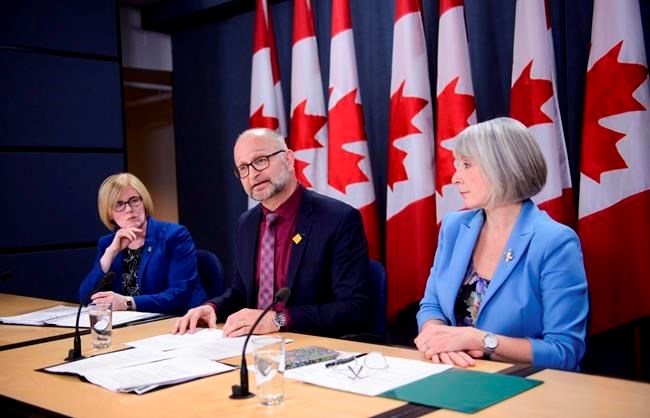 OTTAWA — The Liberal government has introduced legislation aimed at making it easier for intolerably ill Canadians to get medical help to end their lives.

The bill, tabled Monday in the House of Commons, would scrap a provision in the law that allows only those already near death to receive medical assistance in dying — as ordered by a Quebec court last fall.

However, the bill would also create a two-track approach to eligibility for assisted dying, based on whether a person's natural death is reasonably foreseeable.

For those deemed to be near death, the government is proposing to drop the requirement that a person must wait 10 days after being approved for an assisted death before receiving the procedure. It would also reduce the number of witnesses required to one from two.

As well, it is proposing to drop the requirement that a person must be able to give consent a second time immediately prior to receiving the procedure.

The eligibility requirements for those not near death would be more restrictive.

They would face would face a minimum 90-day period for assessment of their requests, which could be shortened if loss of mental capacity is imminent. One of the two medical practitioners who assesses a request would have to have expertise in the person's particular medical condition. And the person would have to be able to give final consent immediately prior to the assisted death.

Those additional safeguards for people not near death are meant to ensure that vulnerable individuals, such as the disabled and elderly, are protected from being pressured into an early death, Health Minister Patty Hajdu told a news conference Monday.

The bill amends a four-year-old law that was introduced by the Trudeau government following a landmark 2015 Supreme Court ruling that struck down the prohibition on medically assisted death.

Last September, on the opening day of the federal election campaign, Justice Christine Baudouin of the Superior Court of Quebec ruled that it is unconstitutional for the federal law to restrict eligibility for medically assisted death to those whose natural death is "reasonably foreseeable."

She similarly said it’s unconstitutional for Quebec, which has its own assisted-dying law, to limit eligibility to those who are at the "end of life."

The ruling technically applies only in Quebec but the government did not appeal it and any amendments to the federal law will apply across the country.

Baudouin gave the government until March 11 to amend the law. Justice Minister David Lametti last week asked for a four-month extension on the deadline to give Parliament time to debate the bill.

"We think we have opened access sufficiently to meet the court's concerns," Lametti said Monday.

The requirement that death be foreseeable "no longer acts as a barrier. It acts a channel between the two streams," he added.

While he expressed confidence that the amendments will pass constitutional muster, Lametti did not entirely rule out referring it to the Supreme Court of Canada for an opinion, rather than potentially force suffering individuals to challenge the amended law and wait years for a ruling.

"The answer's never really no but I think we'll wait and see."

The bill does not deal with broader issues that were excluded in the new law and that must be considered as part of a parliamentary review of the law that is to begin this summer.

Those issues include whether mature minors and those suffering only from mental illnesses should be eligible and whether people who fear losing mental capacity due to conditions like dementia should be able to make advance requests for medical assistance in dying.

Indeed, the new bill would explicitly exclude people suffering solely from mental illnesses from the right to an assisted death.

Lametti said those issues are complex and there is no consensus around them as yet. Hence the need for further study.

The bill would, however, propose a measure intended to deal with a situation in which a person who is near death, has given consent and who has been approved for an assisted death loses the mental capacity to give consent a second time immediately prior to receiving the procedure.

That was the dilemma dramatically illustrated by Audrey Parker, a Halifax woman with terminal breast cancer that had spread to her brain. She pleaded with the government to amend the law but eventually chose to die with medical assistance in the fall of 2018, earlier than she wanted, rather than risk losing the capacity to give last-minute consent.

The second consent requirement has also resulted in some people losing their right to an assisted death while others have forgone pain medication for fear that it will impair their capacity to consent before receiving the procedure.

Dying with Dignity Canada chairman James Cowan — a former senator — welcomed the proposed amendments as "a huge step forward." But he said the organization still has some concerns about excluding those with mental illness and about how some of the proposed additional eligibility requirements for those not near death will work out in practice.

He noted that sometimes a measure that "starts out as a safeguard ends up being a barrier."

But Ray Pennings, executive vice-president of faith-based think tank Cardus, criticized the bill as "unbalanced with its heavy emphasis on expanded access to medical aid in dying without an equal measure of concern for improved guidelines and safeguards" to protect the vulnerable.

He also criticized the bill for failing to protect the right of medical professionals to refuse to participate in assisted dying in any way.

This report by The Canadian Press was first published Feb. 24, 2020.

Trump admin silent after Hajdu pushes back on U.S. plan to raid Canada's drug cabinet
Dec 1, 2020 8:07 AM
Comments
We welcome your feedback and encourage you to share your thoughts. We ask that you be respectful of others and their points of view, refrain from personal attacks and stay on topic. To learn about our commenting policies and how we moderate, please read our Community Guidelines.