OTTAWA — The federal government has suspended shipments of N95 respirators from a Montreal-based supplier after about eight million of the masks made in China failed to meet specifications.
May 8, 2020 3:39 PM By: Canadian Press 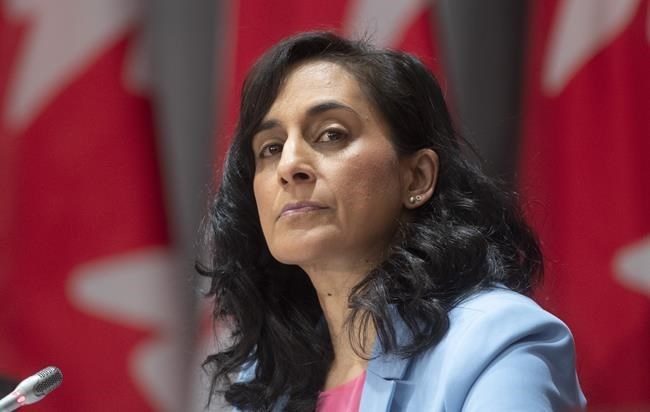 OTTAWA — The federal government has suspended shipments of N95 respirators from a Montreal-based supplier after about eight million of the masks made in China failed to meet specifications.

The office of Procurement Minister Anita Anand said Friday that of the nearly 11 million masks received from the distributor, about one million met federal standards and another 1.6 million masks are still being tested.

N95 masks used to protect against COVID-19 are so-named because they are supposed to screen out 95 per cent of small particles.

Anand's office said none of the approximately eight million masks that fell below federal standards were distributed for medical use, though assessment is ongoing for other uses.

It declined to name the distributor, citing ongoing discussions about reimbursement or discounts, or both, for the masks in question.

Early this week, the Chinese Embassy in Ottawa said one million faulty N95 masks that arrived in Canada from China last month were the result of a "contractual" issue that had since been resolved.

Canada, however, had no comment on the matter until Friday.

The federal government has contracts with several suppliers for a total of some 135.5 million masks.

It says Canada has received 23 planeloads of personal protective equipment and medical supplies including more than 33 million surgical masks.

"We are working with a range of suppliers and distributors, and we have strong processes in place to help ensure that the supplies we receive meet all necessary standards," Anand's office said.

In particular, the Public Health Agency of Canada "conducts stringent testing of items such as masks before they go out to provinces and territories."

The large majority of the products received have met the agency's standards for use, Anand's office added.

It said that while Canada continues to receive significant shipments of protective equipment from international manufacturers, it is also getting orders from domestic manufacturers for gowns, face shields and hand sanitizer, among other products.

This includes an agreement with Medicom, based in Pointe-Claire, Que., for production of 20 million N95 respirator masks and 24 million surgical masks per year for the next 10 years, starting this summer.