Financial aid for students and Canadian YouTube series; In The News for April 29 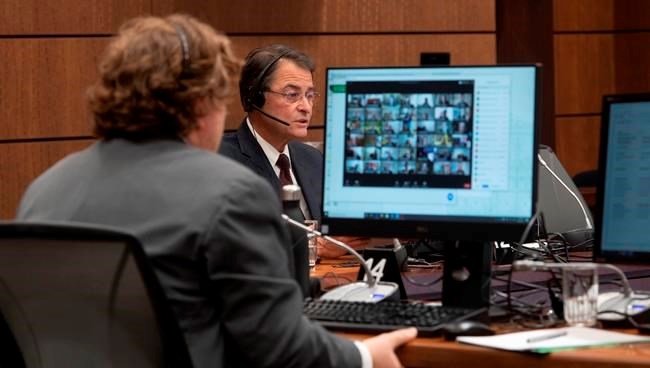 In The News is a roundup of stories from The Canadian Press designed to kickstart your day. Here is what's on the radar of our editors for the morning of April 29 ...

OTTAWA — The House of Commons will be asked today to give rapid approval to legislation authorizing $9 billion in promised financial assistance for students facing bleak summer job prospects in the midst of the COVID-19 pandemic.

But whether the Trudeau government will get the unanimous consent needed to expedite the bill's approval in a matter of hours today remained to be seen late Tuesday.

The government was continuing negotiations with opposition parties on details of the bill, which was shared with them on the weekend.

Conservative Leader Andrew Scheer has said his party wants changes that would ensure the legislation includes incentives for young people to take available jobs, rather than stay home and collect the emergency aid.

A government official, who spoke on condition of anonymity because he was not authorized to speak publicly about the negotiations, says the governing Liberals are open to changing the bill.

New Democrat and Green MPs have also been pushing for the aid package to be expanded to include international students who remain in Canada over the summer.

In other Canadian news ...

FORT McMURRAY, Alta. — Officials with the Regional Municipality of Wood Buffalo say the flooding in the northern Alberta city of Fort McMurray remains a critical situation, with the mayor calling it a once-in-a-century disaster made all the more complicated by the COVID-19 pandemic.

A 25-kilometre ice jam is causing major flooding, forcing nearly 13,000 people from their homes in the downtown.

Data shows the Clearwater River was still rising Tuesday and the Athabasca River had only dropped by about four centimetres.

More than 6,000 people have registered at two evacuation centres and the municipality says the number is expected to grow.

Evacuees are being put up in hotels and work camps so they can continue to follow the COVID-19 physical distancing requirements.

Trump says it hasn't been determined yet whether the federal governor or the airlines would conduct the testing, and "Maybe it's a combination of both."

Trump's comments Tuesday came during a White House event touting a loan program designed to help small businesses weather the coronavirus pandemic, the Paycheck Protection Program. He said the Small Business Administration has processed more loans in 14 days than it has in the previous 14 years.

Trump signed an executive order under the Production Act to classify meat processing as critical infrastructure during the coronavirus outbreak. The goal is to try to prevent a shortage of chicken, pork and other meat on supermarket shelves.

More than 20 meatpacking plants have closed temporarily because of the outbreak. At least 20 workers have died.

BEIJING — China is taking another step toward returning to business as normal by scheduling its most important political meeting of the year for late May.

The National People's Congress was supposed to convene in March but was called off as COVID-19 sickened thousands of people, filling hospitals and disrupting daily life in the country where the pandemic began.

The Congress meeting will start on May 22, and an advisory body will convene a day earlier.

It wasn't immediately clear whether the 3,000 or so delegates would come to Beijing as usual or if the meeting would be held virtually through videoconferencing.

The Spanish government says professional athletes in the country can resume training individually next week.

Prime Minister Pedro Sanchez says "basic" training for professional athletes will be permitted beginning Monday. It's the start of the first phase of the plan aimed at easing the lockdown measures that have been in place since March 14.

High-performance sports facilities will be allowed to reopen in the second phase of the plan, which will begin as early as May 11, depending on the situation in each province.

Sanchez did not say when sports competitions, such as the domestic soccer league, are expected to resume.

The Spanish league has said it doesn't plan to restart before the end of May. The league has already sent clubs a detailed protocol with safety guidelines on how to return to practice.

Dr. Howard Njoo sits down to answer questions about COVID-19 by some of Canada's top YouTube creators in four videos, three of which are now available.

The company says the series is "an effort to share factual, authoritative information with a younger audience that may not be consuming news via more traditional sources."

Creators in the videos include Simply Nailogical, an Ottawa-based crime statistics analyst for the Canadian government whose YouTube channel features nail art.

Then there are do-it-yourself entrepreneurs The Sorry Girls and Peter McKinnon, a Toronto-based photographer who poses questions to Njoo from his paramedic cousin.

Upcoming participants include Jay Machalani, a bilingual Quebec-based creator and medic for the Canadian Forces who posts on the channel jayaddict.

The restaurant chain, which prides itself on using only Canadian beef, says in a statement that its change in policy is due to limited processing capacity at Canadian suppliers, such as a Cargill Inc. plant near High River, Alta.

Cargill has shuttered operations temporarily after a worker died from the COVID-19 coronavirus and hundreds of other employees tested positive.

McDonald's says in a statement it will start sourcing beef from its pre-approved suppliers and facilities outside of Canada effective immediately.

The company says it is also temporarily removing its Angus burgers from menus in Canada — though restaurants may sell them until supplies run out.

This report by The Canadian Press was first published April 29, 2020.