OTTAWA — First Nations, Inuit and Metis leaders are raising concern about a growing number of outbreaks of COVID-19 in Indigenous communities and say it's getting harder to find the money and supplies to deal with them.
May 8, 2020 3:11 PM By: Canadian Press 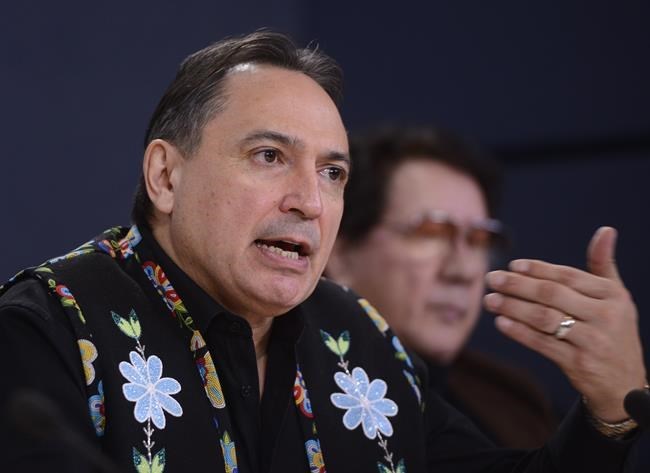 OTTAWA — First Nations, Inuit and Metis leaders are raising concern about a growing number of outbreaks of COVID-19 in Indigenous communities and say it's getting harder to find the money and supplies to deal with them.

National Chief Perry Bellegarde of the Assembly of First Nations told a House of Commons committee Friday that provinces and jurisdictions should be cautious about lifting pandemic restrictions, given that the number of COVID-19 cases in First Nations has increased.

As of May 7, there were 164 confirmed cases on First Nations reserves.

"While the virus has been slower to reach First Nations, the number of cases is rising daily," Bellegarde said.

"I fear there are already more cases among our people than we currently know."

Bellegarde pointed to a number of systemic issues that make Indigenous populations more vulnerable to contracting the virus, including overcrowded housing, inadequate health services in many communities, food insecurity, lack of clean water and the remoteness of northern, fly-in communities.

"Canada's response must take all of these unique factors into account," Bellegarde said.

He noted that Indigenous Services Minister Marc Miller had appeared before the same committee last week, where he detailed the $740 million the federal government is putting toward helping First Nations, Inuit and Metis respond to the public health crisis.

"We appreciate that these funds are scalable and based on need, but we need to see this funding greatly expanded as the needs are many," he said.

Ottawa is making decisions about how it allocates resources to First Nations to deal with the crisis without the input or involvement of Indigenous leaders, Bellegarde said, which is something he said should change immediately.

"Canada must engage First Nations directly to properly address the circumstances we face and respect First Nations' jurisdiction. That includes a seat at any table addressing the current health crisis — even in the future when you start looking at reopening the economy, we have to be at those tables."

Natan Obed, president of the Inuit Tapiriit Kanatami, told the committee he is grateful that northern territories have been spared of large outbreaks of the virus so far. In all of Inuit Nunangat — including 51 Inuit communities spread across the northern regions of four provinces and territories — there have been only 17 confirmed COVID-19 cases. All have recovered.

However, Obed noted that pandemic restrictions are having major impacts on the Inuit territories, which already face economic challenges.

The reliance on annual sealift shipments that transport non-perishable goods to the territories during the four or five months when the waters are ice-free is causing great concern this year, Obed said.

"The ability of individuals and businesses to place orders has already been impacted in warehouses in the South that would typically start to fill up by now, but are sitting empty. This will have a direct impact on businesses and households in this and future years."

He also called for greater testing capacity and reduced wait times for results as a key need, especially as economies begin to reopen.

David Chartrand, vice-president of the Metis National Council, says his people are falling through jurisdictional cracks, which he believes has contributed to a sharp rise in COVID-19 outbreaks in Metis communities in Western Canada.

He pointed to the spike in cases in and around the remote Dene village of La Loche, 600 kilometres northwest of Saskatoon. A Metis village next to La Loche has over 100 cases but is not getting the same federal and provincial support as the First Nations reserve next door, Chartrand said.

"On the Metis side, it's just skyrocketing because there was no plan, no supports, no programs, no supply chain because both governments are saying, 'No, no it's not my jurisdiction, it's yours,' so both are still blaming each other and it's creeping into the next villages now," Chartrand said.

This same jurisdictional wedge is also being blamed as the reason the Metis National Council had to buy its own personal protective equipment for its villages directly from China. Chartrand says neither the province nor Ottawa has provided his people with necessary PPE or other medical supplies, so they went out into the open market and procured their own.

All three leaders say they lack detailed data to properly track the spread of the virus through their communities, which is hampering their ability to determine the true size and scope of the spread and how best to respond. This is due, in part, to the fact much of this data is gathered by provinces and is not being widely shared, the leaders said.

They also stressed that although they appreciate the federal dollars that have begun to flow to date for the COVID-19 response, much more is needed.

This report by The Canadian Press was first published May 8, 2020

Local residents honk horns, wave flags to mark 30th anniversary of Oka crisis
Jul 11, 2020 8:36 AM
Comments
We welcome your feedback and encourage you to share your thoughts. We ask that you be respectful of others and their points of view, refrain from personal attacks and stay on topic. To learn about our commenting policies and how we moderate, please read our Community Guidelines.