OTTAWA — Canada wants Iran to explain why it still hasn't handed over the black boxes from the Ukrainian jetliner that was shot down by Iranian military near Tehran on Jan. 8, Canadian Transport Minister Marc Garneau said Wednesday.
Jun 10, 2020 10:11 AM By: Canadian Press 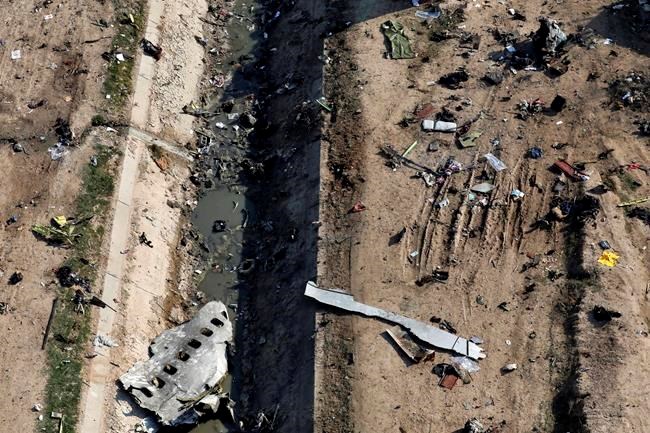 OTTAWA — Canada wants Iran to explain why it still hasn't handed over the black boxes from the Ukrainian jetliner that was shot down by Iranian military near Tehran on Jan. 8, Canadian Transport Minister Marc Garneau said Wednesday.

Garneau delivered a short speech to the International Civil Aviation Organization council Wednesday morning, where he noted it has been 92 days since Iran told the United Nations agency it would hand over the devices.

"Canada would appreciate an update to this council from Iran on its plans to transfer the flight recorders as a demonstration of continued commitment to a full and transparent investigation," Garneau said.

Iran initially denied having anything to do with the crash, which killed all 176 passengers and crew. Several days later Iran admitted its military had mistaken the plane for a hostile object in the middle of military tensions with the United States. There were 55 Canadians and 30 permanent residents killed, while 138 of the passengers in total were travelling to Canada via Kyiv, many of them returning to school and work after the December holiday.

The ICAO is a specialized agency of the UN that co-ordinates international standards for civilian aircraft. Among its policies are the best practices for conducting investigations of accidents involving civil aircraft.

On March 11, at a previous meeting of the council, Iran's representative Farhad Parvaresh, told the council members it would hand over the data and voice recorders from Ukraine International Airlines Flight 752 within two weeks. That has not happened.

Initially the devices were to go to Ukraine, and if they could not do the analysis then they would go to France, which has the equipment needed to get the data. Canadian officials were to be present when the data was analyzed.

"While we recognize the impact of the global pandemic, Canada fully expects Iran to live up to its commitment and the ICAO standards set out in Annex 13," Garneau said. "We expect the analysis of the flight recorders be done as soon as possible, and in a way that protects the health of all technical experts."

The devices are damaged and the technology to download and analyze the data they contain is not available in Iran. For more than two months Iran insisted that France should send the technology to Iran for the analysis and France said that was not possible.

The ICAO council is also discussing Canada's proposal for a Safer Skies strategy, to better manage how civil aircraft operate in areas of military conflict. Prime Minister Justin Trudeau first discussed the initiative at the Munich Security Conference in February.

The work for the strategy first began after the July 2014 crash of Malaysian Airlines Flight 17, which was shot down by a surface-to-air missile fired from pro-Russian, separatist-controlled territory in eastern Ukraine. There were 298 people killed, most of them Dutch nationals.

Trudeau said in February the recommendations from that crash to better protect civilian planes flying in conflict zones needed to be implemented. The Safer Skies strategy now being considered by ICAO is part of that process. The main ask is for a full analysis of what gaps remain in assessing the risks to aircraft flying over conflict zones, managing those risks and what the responsibilities are for airline operators.

"Our common goal is to ensure the world never lives through a similar tragedy again," said Garneau.

ICAO has developed a working paper to push the strategy forward but Garneau's spokeswoman said Wednesday the details of the plan are not yet publicly available.