'Lucky to be here:' Paralyzed Winnipeg hockey player trains for success in life

WINNIPEG — Sweat builds on Reese Ketler's brow, as his hands clasp both ends of a hockey stick. Each time the 20-year-old thrusts the stick toward his physiotherapist, his body learns to use different muscles in his arms and back.
Mar 13, 2020 5:38 AM By: Canadian Press 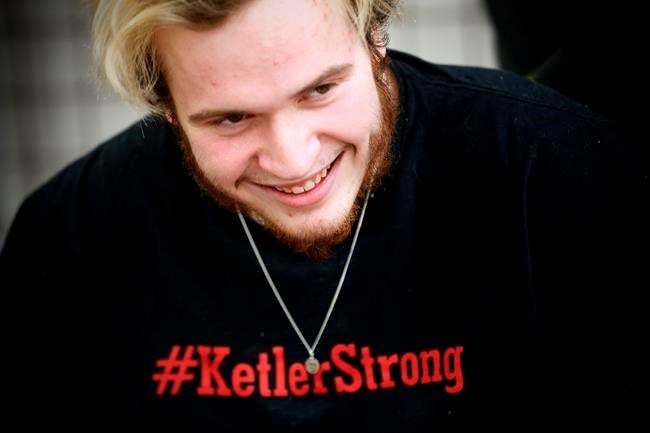 WINNIPEG — Sweat builds on Reese Ketler's brow, as his hands clasp both ends of a hockey stick.

Each time the 20-year-old thrusts the stick toward his physiotherapist, his body learns to use different muscles in his arms and back.

"I just look at life like I am lucky to be here," the former hockey player says after a workout at Winnipeg's Health Sciences Centre.

"It could have ended way worse for me."

April Gobert and Trevor Ketler laugh as they reflect on their two sporty and energetic sons. The pair grew up strong, both physically and spiritually, and were always athletes.

Gobert was in the stands watching her youngest boy, a defenceman with the St. Vital Victorias junior hockey team, playing in a game on Dec. 19.

At one point, Reese Ketler got the puck, made an end-to-end rush and took a shot.

Then he collided with a player from the other team and went into the boards. A gasp washed over the rink before it fell silent.

A trainer rushed to Ketler and put a hand to her head — an emergency sign.

Gobert, a physiotherapist, ran onto the ice.

Gobert tried to stay strong for her son but knew he had signs of a serious spinal cord injury.

"I was dry heaving outside the arena, and then I threw up in the ambulance," Gobert recalls.

Ketler immediately went for surgery. A doctor later told him that he would never walk again, but there was no doubt he would be successful in life.

During the recent hospital workout, while doing 125-pound lateral pull downs, Ketler says he thinks about his future.

Going back to the University of Winnipeg to finish his business degree — pull and grunt.

"Originally, I could not pick up a water bottle. I had very little movement in my hands," Ketler says. "I couldn't feed myself, I couldn't do anything."

He challenges himself every day to improve and get stronger, he says.

"I'm still going to do all the goals I set for myself in life. I will just not be able to walk."

Ketler is what's termed a C7 tetraplegic. It means he has an injury that affects all four of his limbs. Generally, people with the injury have use of their arms and can extend their wrists, but they don't have finger movement.

Ketler proudly moves his fingers, lifts a water bottle and takes a sip.

Sitting on an exercise bed, he puts his arms out wide and his bleached-blond hair falls in his eyes. A chain hangs around his neck with the number 6 — his jersey number.

Physiotherapist Kevin Stewart lightly nudges Ketler in different directions. Ketler explains that he doesn't have any trunk muscles and is learning to use those that are still working in his chest, back and arms to balance himself.

Every day, he does occupational therapy, weightlifting and other exercises. It's physically and emotionally demanding, but Ketler says he thinks about all the people supporting him — his family, friends and the hockey community across the country — and he pushes on.

Since the injury, local hockey families, neighbours and friends have stocked his family's fridge with food.

Ketler and his parents name more than a dozen fundraising efforts that have supported them: a crossfit group, a skate-a-thon, a GoFundMe page, bottle drives. The St. Vital Minor Hockey Association gave out stickers with Ketler's number to all 900 players to put on their helmets. Some Winnipeg Jets also visited Reese in the hospital and invited him to a game. He keeps people informed on his progress through his Instagram page.

"Hockey is like a brotherhood," Ketler says. "It's truly inspiring to see them reach out to me ... and I'm so grateful for that."

The conversation with Ketler, as it often does, goes back to everything he hopes to achieve — returning to school, writing a book, maybe doing a speaking tour.

When he played hockey, he put his all on the ice. Now, he's putting it all into succeeding in life, he says.

That's how he plans to give back to everyone who has helped him.

"I really never thought that was going to be the last time I was going to play hockey or anything like that. But it happened, I have to move on, and really focus on what I really want to do," he says.

"People want to see me succeed."

This report by The Canadian Press was first published March 13, 2020