VANCOUVER — T.J. Lovell had just 30 minutes to pack up his belongings from the tent city in Oppenheimer Park if he wanted access to a hotel room that he could share with his father.
May 8, 2020 4:38 PM By: Canadian Press 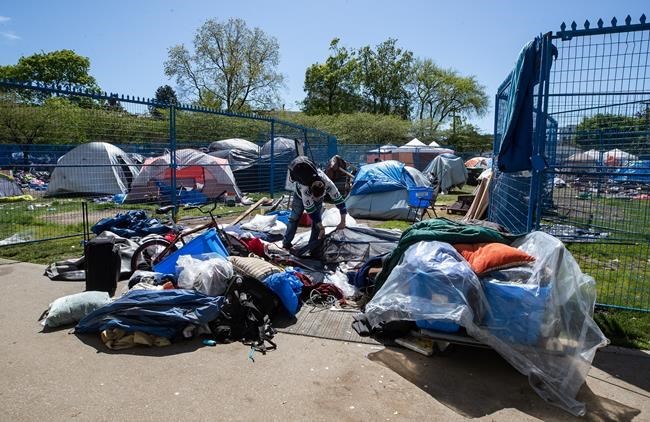 VANCOUVER — T.J. Lovell had just 30 minutes to pack up his belongings from the tent city in Oppenheimer Park if he wanted access to a hotel room that he could share with his father.

Lovell, who camped in the tent city for two months, was one of about 300 homeless people who have been living at the park due to a lack of affordable housing before he was moved to a hotel in downtown Vancouver.

"The rooms we have are nicer than most places I've actually lived in and paid rent for. There's no mould, there's no water damage, there are no bugs," he said.

Advocates and the homeless say the closure of tent cities in Victoria and Vancouver offer governments a chance to reshape housing policies across the country.

The provincial government set Saturday as a deadline for campers to be out of Vancouver's Oppenheimer Park.

The deadline to move people out of Topaz and Pandora parks in Victoria has been extended until May 20.

Many of the campers were moved to local hotels by the provincial government.

The Canadian Housing and Renewal Association is calling on the federal government to look at establishing a permanent acquisition program, turning temporary properties in to full-time housing, said its executive director Jeff Morrison.

"Could we retain them on a long-term basis so we can actually address homelessness?" he said in an interview. "The means are there, it's just a question whether we have the political will to do that."

Failing that, Morrison said a stimulus plan after the pandemic should include building affordable housing.

Other national advocates are warning provincial and the federal governments against returning to previous housing plans for homeless people.

Tim Richter, the CEO of the Canadian Alliance to End Homelessness, said there is concern that governments at various levels will abandon their affordable housing plans and return to the status quo.

"A lot of people have been talking about 'when will life go back to normal?' " he said. "But from a homelessness perspective, normal wasn't any good. Normal was people left on the street."

B.C.'s approach has faced some criticism from local advocates, who argue the province is just targeting the most visible section of its homeless population, bypassing those who are waiting for permanent housing.

"It shouldn't be about pitting people against anyone, but somebody might be getting housed before another person who is waiting longer or who is more in need. Where is that compassion to looking after those people who are the most vulnerable?" said Fiona York, a co-ordinator with the Carnegie Action Plan in Vancouver about those in Oppenheimer receiving hotel rooms.

She would like to see B.C. follow the lead of Toronto and purchase empty hotel sites to house more homeless people.

"Hopefully this will be an opportunity to make sure this never happens again and that we rethink the whole idea of housing and homelessness and take the opportunity to actually address it in a meaningful way," York said.

"The first challenge was to deal with the question of Oppenheimer and we're dealing with what we believe are some of the most vulnerable people in the province, in desperate need, and we think that’s what we’ve done by addressing this issue and moving people in a compassionate and collaborative way into new housing,” he said Friday.

The province was not attempting to "shuffle people off" to where they were less visible, he added.

The provincial government is committed to building or finishing 23,000 homes across the province to ensure those moving into temporary accommodations have permanent homes, he said.

Lovell said he's fine with the temporary nature of the hotels and hopes to be able to afford a basement suite when he and his father have to leave.

"Some people can't take care of themselves, but I want to get back to a normal lifestyle."

Young Syrian refugee gives back to Quebec by working at long-term care home
Jul 5, 2020 8:22 AM
The latest numbers on COVID-19 in Canada for Sunday, July 5
Jul 5, 2020 7:58 AM
Comments
We welcome your feedback and encourage you to share your thoughts. We ask that you be respectful of others and their points of view, refrain from personal attacks and stay on topic. To learn about our commenting policies and how we moderate, please read our Community Guidelines.