Snowbirds to boost morale amid COVID-19 with cross-country tour

OTTAWA — The Canadian Armed Forces is deploying its famed Snowbirds aerobatics team on a cross-country tour aimed at boosting morale as Canadians continue to struggle with the COVID-19 pandemic.
Apr 29, 2020 12:50 PM By: Canadian Press 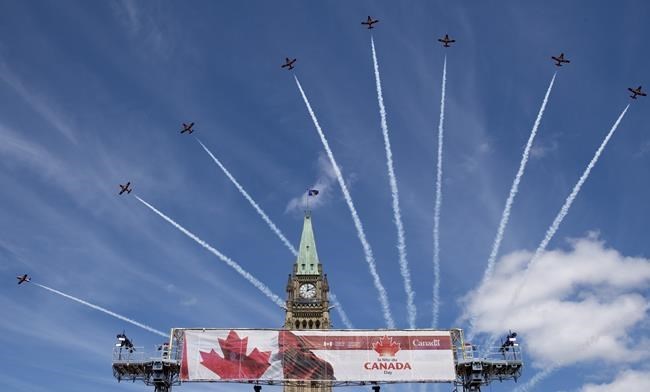 OTTAWA — The Canadian Armed Forces is deploying its famed Snowbirds aerobatics team on a cross-country tour aimed at boosting morale as Canadians continue to struggle with the COVID-19 pandemic.

The plan to unleash the team and have its nine-plane formation fly over Canadian cities starting this weekend follows a similar initiative south of the border, where the U.S. military's own flight demonstration teams have been flying in honour of front-line workers and first responders.

Some have criticized the Pentagon's decision to launch such a tour, given the mounting death toll from COVID-19 in the U.S. and what some have said are more pressing needs, such as getting protective equipment for health-care workers.

Prime Minister Justin Trudeau announced the Snowbirds' cross-Canada tour during his daily news conference Wednesday, describing the plan to deploy the red, white and blue Tutor jets as an effort to "salute Canadians doing their part to stop the spread of COVID-19."

"As we watch the Snowbirds fly over our homes, let's remember that we are all in this together."

The team, which is based in Moose Jaw, Sask., will conduct its first flyover in Nova Scotia before heading west.

Exact details on when and where the Snowbirds will perform are expected in the coming days, though officials have said the team will focus on hospitals and residential neighbourhoods.

Some Canadians took to social media on Wednesday to ask whether the flyovers are necessary, given many people are continuing to struggle and die from COVID-19. That echoed criticisms of the U.S. military's decision to deploy its Blue Angels and Thunderbirds teams.

"We would be flying regardless," the Snowbirds wrote on their official Twitter account in response to criticisms about the planned tour. "Now we're just spreading the love (from a distance of course) instead of saying hello to the same farmers around Moose Jaw."

The Snowbirds initially paused their training in March because of COVID-19 and delayed the start of their flying season, which was to begin in June. Now the team will spend two days at CFB Moose Jaw flying refresher and training missions before starting the tour.

The Snowbirds season ended early last year after one of the team's Tutor aircraft crashed prior to an air show in the U.S. state of Georgia. Capt. Kevin Domon-Grenier sustained minor injuries when he ejected from the plane, which crashed into a farmer’s field. No one else was hurt.

This report by The Canadian Press was first published April 29, 2020.