The latest news on the COVID-19 global pandemic (all times Eastern): 10:10 p.m. The City of Toronto says it is closing down one of its child care centres for 14 days after three staff members tested positive for COVID-19.
Apr 28, 2020 8:15 PM By: Canadian Press 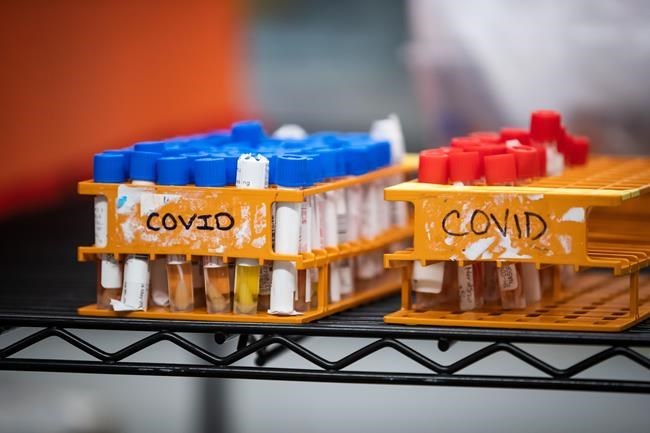 The City of Toronto says it is closing down one of its child care centres for 14 days after three staff members tested positive for COVID-19.

The city says two other staff members at the facility, as well as two children, are awaiting test results.

Staff are still reaching out to notify parents of the 58 children who attend the centre.

Staff members and the children are being advised to stay home for two weeks from their last day at the centre.

The federal government is being asked for up to $150 million in financial assistance from the Canadian Football League due to the COVID-19 pandemic.

The league's regular season start in June has been postponed, and there is no timeline for when or if play will begin.

CFL commissioner Randy Ambrosie told The Canadian Press the league hasn't given up on staging a 2020 season but it has postponed the start of training camps — which were to open next month.

Many provincial governments already have said there will not be sports events with large crowds this summer.

More than 2,800 of those cases have been fatal.

With every province and territory reporting their latest number of cases today, the country has 50,016 positive confirmed tests for the virus.

The world has now seen more than three million cases of COVID-19, with about 215,000 related deaths.

Premier Jason Kenney says details will be announced later this week about the province's plan to relaunch the economy.

He says if things go well, some restrictions may be lifted in May.

A COVID-19 outbreak in a poultry processing plant in Coquitlam, B.C., is responsible for many of the 55 new cases reported by the province today.

The province says there were 21 new cases identified in the plant over the past 24 hours.

There has been a total of 2,053 cases in the province but 1,231 of those people have recovered.

Health officials in Saskatchewan are reporting one new case of COVID-19.

The provincial total sits at 366, with 291 of those infected having recovered.

Five people have died, including an 83-year-old resident of La Loche, a Dene community 600 kilometres northwest of Saskatoon.

As of Monday, La Loche had 29 cases and nine in some surrounding communities.

Prince Edward Island is reporting one new case of COVID-19 — its first since April 15.

Chief medical officer of health Dr. Heather Morrison says the latest case is a man in his 50s and is related to international travel.

There have been 27 cases on the Island and 24 are considered recovered.

The province has announced the first phase of efforts to ease public health restrictions.

Also on May 1, outdoor gatherings of limited size and activities such as fishing and golf will be allowed.

Screening will continue at points of entry and all people entering the province will be required to isolate for 14 days.

Manitoba health officials are reporting no new COVID-19 cases, leaving the total to date at 272.

The number of active cases in the province has dropped to 57.

On Wednesday, The Manitoba government plans to reveal its plan to reopen the economy and ease some restrictions.

The New Brunswick government says it will restrict temporary foreign workers from entering the province.

Premier Blaine Higgs says with so many outbreaks of COVID-19 in surrounding jurisdictions, the province's borders must remain closed for now.

This restriction does not affect the status of temporary foreign workers currently in the province.

Meanwhile, people are being allowed to enter New Brunswick for less than 24 hours to remove belongings from a student's residence.

Anyone leaving New Brunswick to remove belongings from a residence in another province is being ordered to self-isolate for 14 days when they return.

New Brunswick is reporting no new cases of COVID-19 for the 10th day in a row.

Chief medical officer of health Dr. Jennifer Russell says the provincial total remains at 118 cases and 114 of those are considered recovered.

She says only one person remains in hospital.

The province says it is expanding the number of symptoms that would qualify people for COVID-19 testing.

Quebec says it will begin gradually restarting its economy in the coming weeks, aiming to reopen stores while resuming construction and ramping up manufacturing.

Premier Francois Legault says the province will keep close tabs on the number of COVID-19 cases and the ability of hospitals to respond.

Stores with their own entrances will be allowed to open on May 4 outside of the Montreal area and May 11 in the Montreal region.

On Monday, Legault announced elementary schools and daycares across the province would be reopened by May 19.

The province is also reporting a total of 25,757 confirmed cases.

Premier Francois Legault says while 1,625 people are in hospital, 94 are long-term care patients who have recovered but aren't being returned to their homes.

Legault says while the number of deaths have risen in long-term care homes, other deaths remain largely stable in the province.

He says that's why the government is moving ahead with a plan to restart the economy and reopen primary schools and daycares.

Nova Scotia has announced a $380-million loan program to help municipalities with financial losses due to COVID-19.

The Municipal Affairs Department will approve requests from municipalities before sending them to the corporation for final approval.

The Manitoba government says it will now test anyone with COVID-19 symptoms to see if they have the virus that causes the disease.

Premier Brian Pallister says even people with mild symptoms, such as a runny nose or cough, can be tested.

To accommodate the extra tests, the province says it will spend up to $10 million to have Dynacare join the Cadham Provincial Lab in running tests.

Cadham has the capacity to run 1,000 tests a day and Pallister says Dynacare will ramp up to add another 2,000 daily tests by the end of summer.

Newfoundland and Labrador isn't reporting any new cases of COVID-19, leaving the provincial total at 258.

There have been three COVID-19 related deaths so far in the province and Fitzgerald says 222 people have recovered.

Federal forecasting data suggests that by May 5, as many as 3,883 people could die due to COVID-19.

But she says with a large number of outbreaks occurring in long-term care homes, there has been a higher fatality rate.

The chief public health officer for Canada is giving an update this hour on national projections for the spread of COVID-19.

Seven per cent have tested positive.

Tam says the new models are planning tools that allow illness rates to be forecasted in the short term and to allow public health measures to be adjusted.

Health officials are also reporting 15 new cases of the virus bringing the total of confirmed cases to 915.

The province says the newly reported deaths occurred at the Northwood long-term care home in Halifax, which has been hardest hit by the disease.

There are 10 licensed long-term care homes and unlicensed seniors facilities in Nova Scotia with cases of COVID-19, involving 218 residents and 95 staff.

Prime Minister Justin Trudeau says six million surgical masks will be shipped to the provinces and territories this week.

Prime Minister Justin Trudeau says in many parts of Canada the COVID-19 curve has flattened.

But he says while the measures taken so far to curb the spread of the novel coronavirus are working, Canadians can't let up.

He says a coming national framework for easing up on some of those measures is based on ensuring COVID-19 can be contained.

The new provincial total of 15,381 cases is an increase of 3.5 per cent over the previous day's total and includes 951 deaths and 8,964 resolved cases.

Hospitalizations went up, but the numbers of people in intensive care and on ventilators declined slightly.

More than three dozen organizations from across British Columbia and Canada are demanding an immediate inquest into the April 15th death of an inmate due to COVID-19.

The unnamed man died at Mission Institution east of Vancouver -- where 106 inmates have now tested positive for the virus -- and he became Canada's first reported COVID-related death of a federal prisoner.

They say inmates cannot be allowed to die in prison from the "ticking timebomb of COVID-19" and call an inquest a "minimum first step" to ensure similar deaths are prevented.

Note to readers: This is a corrected story. A previous version based on information released by the provincial government said there had been 1,190 recovered cases in British Columbia.