OTTAWA — Graduates of the class of 2020 should take inspiration from the generation of Canadians who came of age ahead of the Second World War, Prime Minister Justin Trudeau said Wednesday as he delivered a commencement speech broadcast to students a
Jun 10, 2020 1:10 PM By: Canadian Press 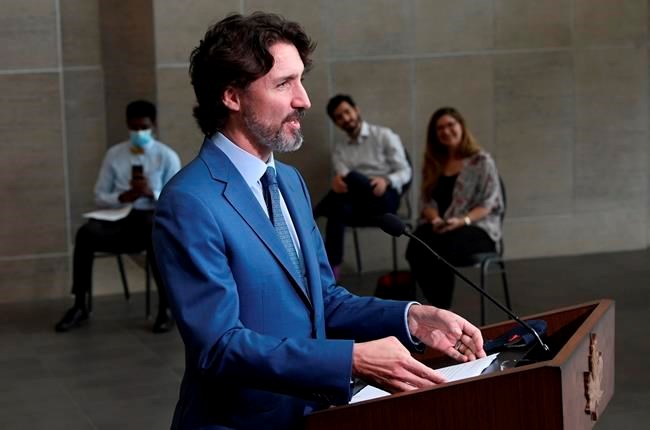 OTTAWA — Graduates of the class of 2020 should take inspiration from the generation of Canadians who came of age ahead of the Second World War, Prime Minister Justin Trudeau said Wednesday as he delivered a commencement speech broadcast to students across the country.

The world is facing an unprecedented number of challenges, including climate change, social injustice and the COVID-19 pandemic, causing levels of upheaval not seen in generations, Trudeau said.

The last one was the so-called Greatest Generation, Trudeau suggested, the cohort which graduated at the end of the Depression and then found themselves plunged straight into war.

In its devastating aftermath, they went to work.

"They built the institutions that carried us through the second half of the 20th century. They set the world on a path of more solidarity, more compassion, more understanding," he said.

"They sacrificed a lot, they dreamed big, they worked hard, and they left us a world far better than they found it. The challenge facing the Class of 2020 is not dissimilar."

There was little pomp to Wednesday's events thanks to the circumstances of COVID-19. What could have been an auditorium filled with thousands of grads was instead an airy atrium, with just four students — two who introduced Trudeau in English, two in French — as well as a few dozen staff and some of their family.

Trudeau and the students strode into the room at Carleton University not wearing the tasselled hats and gowns customary upon graduation, but masks, and not crammed into creaky seats but astride wooden stools spaced the required two metres apart.

The graduates spoke on similar themes — the fight for climate change, for equality, social justice and also their own futures.

Jordan Gray of Carleton University and Caleb Adedze of La Cite college in Ottawa, both Black, also spoke of the racism they'd encountered and the desire for change.

"It is not always easy to succeed when discretion within the academy and beyond favours those who are not Black, not Indigenous and not people of colour," Gray said.

At one point, he said, he had thought he wouldn't make it to the end of his studies. He is graduating this year with one of the university's highest honours for an undergrad, and has presented his undergraduate research in international relations around the world.

The funeral Tuesday for George Floyd, who died in the hands of police in Minnesota in May, serves as a reminder, Gray said.

"The racism that manifested in George Floyd's killing is often structurally supported by our own institutions," he said.

Trudeau, seated on a wooden stool behind him, nodded.

Trudeau's speech followed similar held in the U.S. and elsewhere, as politicians — including former U.S. president Barack Obama — and celebrities have banded together to create online events to celebrate the graduations of both high school and post-secondary students whose party plans were derailed by COVID-19.

Trudeau's remarks were broadcast live to graduates across the country as traditional in-person ceremonies have largely been punted.  He acknowledged how different that made things for this year's class, who had imagined not only different celebrations but emerging from school into a very different world than the one which now exists.

"2020 has also exposed the limitations and flaws of our world, the world that you are set to inherit," he said.

"That can be unsettling, and even alarming. But it's also a wake-up call. A wake-up call on how much you are needed."

From participating in the #MeToo movement, the push towards reconciliation with Indigenous Peoples and marches for climate change, this generation is already standing up for change, Trudeau said.

"You understand not just the value, but the power, of community better than most. And that's why I trust you will be the 21st century's greatest generation," he said.

"You know what is wrong with the world and how to fix it. Your job is not only to challenge people like me, but to bring us along."